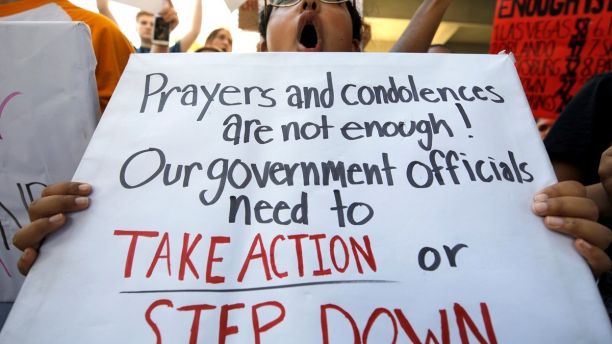 Thousands of students walked out of classrooms nationwide Wednesday to protest gun violence and call for new gun control measures on the one month anniversary of the Parkland school shooting that left 17 dead and sparked a grassroots wave of activism.

From Maine to Hawaii, students left school to demonstrate against gun violence in what could be the biggest display yet of the student activism that has emerged in response to last month’s massacre at Florida’s Marjory Stoneman Douglas High School.

In nearly 3,000 protests nationwide, students from the elementary to college level took up the call in a variety of ways. Some took part in roadside rallies to honor shooting victims and protest violence. Others held demonstrations in school gyms or on football fields. In Massachusetts and Georgia and Ohio, students went to the statehouse to lobby for new gun regulations.

The coordinated walkouts were loosely organized by Empower, the youth wing of the Women’s March, which brought hundreds of thousands of demonstrators to Washington, D.C., last year. The group urged students to leave class at 10 a.m. local time for 17 minutes — one minute for each victim in the Florida shooting — and suggested demands for lawmakers, including an assault weapons ban and mandatory background checks for all gun sales.

“Our elected officials must do more than tweet thoughts and prayers in response to this violence,” the group said on its website.

Students spoke out about why they chose to leave class.

Amanya Paige, 16, a junior at Parkdale High School in Prince George’s County, told the Washington Post that many schools in her district are participating in on-campus walkouts “to pay our respects and to show that the student voice matters and we won’t stand for the lack of gun control when it comes to school safety. This is where we spend the majority of our time and pray that we are safe every day.”

“Seventeen people are dead and I am no longer willing to listen to politicians who deem my life less valuable than a piece of metal.” — Maya Homan, of Palo Alto, Calif., told the New York Times.

In Parkland, a walkout at Stoneman Douglas is expected to remain within the school’s perimeter, in part for safety reasons, Ashley Schulman, a 17-year-old senior, told the Wall Street Journal.

But each community was urged to shape its own protests, and while parents and teachers in many districts worked together to organize age-appropriate activities, school administrators had mixed reactions. Some have applauded students for taking a stand, while others threatened discipline.

Districts in Sayreville, New Jersey, and Maryland’s Harford County drew criticism this week when they said students could face punishment for leaving class. In Pensacola, Florida, Superintendent Malcolm Thomas ordered students to hold an in-school assembly instead, telling them they could discuss voting and mental health issues, but not guns, and saying that political banners would not be allowed.

“You can’t make political statements, it can’t be a pro-gun or anti-gun assembly,” Thomas told the Pensacola News-Journal.

Free speech advocates are ready for any confrontations.

I am no longer willing to listen to politicians who deem my life less valuable than a piece of metal.

The American Civil Liberties Union issued advice for students, saying schools can’t legally punish them more harshly because of the political nature of their message. In Pennsylvania, Wisconsin and Texas, some lawyers said they will provide free legal help to students who are punished. The ACLU of Georgia’s guidance letters to districts said “The United States Supreme Court has long held that students do not ‘shed their constitutional rights to freedom of speech or expression at the schoolhouse gate’.”

This nationwide action is one of several protests planned for coming weeks. The March for Our Lives rally for school safety is expected to draw hundreds of thousands to the nation’s capital on March 24, its organizers said. And another round of school walkouts is planned for April 20, the 19th anniversary of the Columbine High School shooting in Colorado.

After the walkout Wednesday, some students in Massachusetts say they plan to rally outside the Springfield headquarters of Smith & Wesson, where students and religious leaders are expected to call on the gun maker to help reduce gun violence.

At Case Elementary School in Akron, Ohio, a group of fifth-graders organized a walkout with the help of teachers after seeing parallels in a video they watched about youth marches for civil rights in 1963. Case instructors said 150 or more students will line a sidewalk along a nearby road, carrying posters with the names of Parkland victims.

The walkouts have drawn support from companies including media conglomerate Viacom, which said it will pause programming on MTV, BET and all its other networks for 17 minutes during the walkouts, and allow students to temporarily take over MTV’s social media accounts.

In suburban Atlanta, one of Georgia’s largest school systems announced that students who participate might face unspecified consequences. 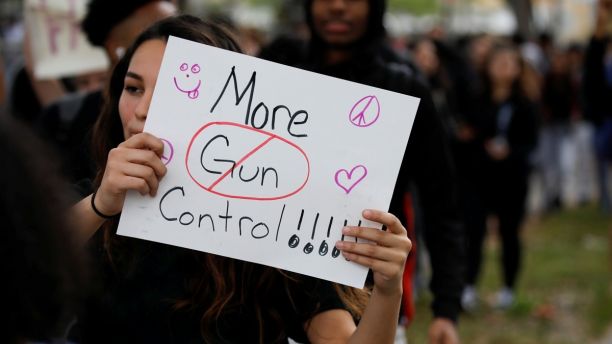 Students from South Plantation High School carrying placards and shouting slogans walk on the street during a protest in support of the gun control, Feb. 21, 2018.

But some vowed to walk out anyway, understanding that accepting punishments is part of what can make civil disobedience powerful.

The possibility of being suspended “is overwhelming, and I understand that it’s scary for a lot of students,” said Lian Kleinman, a junior at Pope High. “For me personally this is something I believe in, this is something I will go to the ends of the Earth for.”

Other schools sought a middle ground, offering “teach-ins” or group discussions on gun violence and working to keep things safe. Officials at Boston Public Schools said they arranged a day of observance Wednesday with a variety of activities “to provide healthy and safe opportunities for students to express their views, feelings and concerns.” Students who don’t want to participate could bring a note from a parent to opt out.