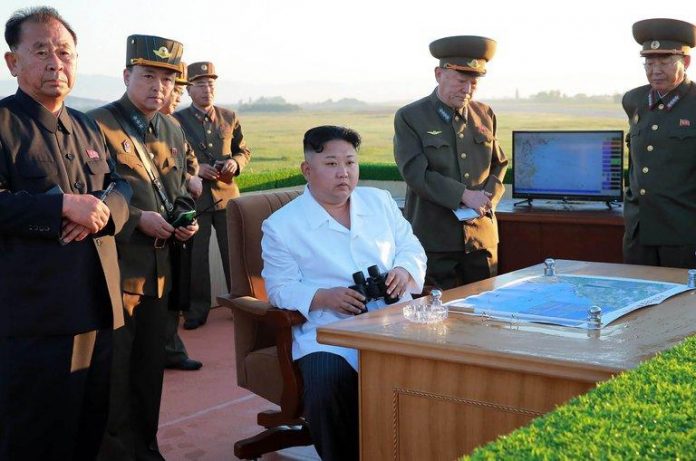 The communist regime of North Korea has test-fired its 9th missile this year.

Wearing a white shirt and grey pants, North Korea’s dictator Kim Jong Un was on hand to inspect a test launch of a new type of anti-aircraft guided weapon system.

The government’s new agency claims he told his commanding officers that the weapon systems’ efficiency has considerably improved as well as the hitting accuracy.

Sunday’s ballistic missile was fired off North Korea’s east coast and landed in the waters of Japan’s economic zone.

South Korea says the missile traveled about 280 miles and reached around 74 miles in altitude.

It is the latest in a string of recent test launches as the North seeks to build nuclear-tipped ICBMs that can reach the US mainland.

“We always assume that, with a testing program, they get better with each test,” U.S. Secretary of Defense Jim Mattis told CBS’ “Face the Nation.”

Mattis also warns that a war with North Korea would be catastrophic.

“Why do I say this? The North Korean regime has artillery cannons and rocket launches within range of one of the most densely populated cities on earth, which is the capital of South Korea,” Mattis said. “This regime is a threat to the region, to Japan, to South Korea. And in the event of war, they would bring danger to China and to Russia as well.”

Meanwhile, in a dramatic show of force, the U.S. now as three aircraft carriers in the region.

According to Voice of America, the USS Nimitz has joined USS Carl Vinson and USS Ronald Reagan in the western Pacific

This comes as America prepares to test an anti-missile systems Tuesday that will simulate a North Korean strike, including an intercontinental ballistic missile for the first time.