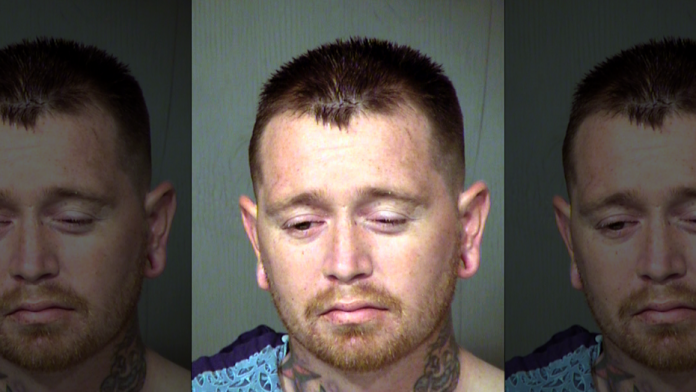 PHOENIX –  A murder charge against a Phoenix man in the shooting death of his 9-year-old son earlier this year has been dismissed at the request of prosecutors.

The county prosecutor’s office said Tuesday that it concluded it could not prove all the elements of the first-degree murder charge against Kansas Lavarnia in the March 20 death of his son Landen. The charge was dismissed six weeks ago, but prosecutors have the option of charging Lavarnia, 31, again.

His wife, Wendy Lavarnia, told police that her 2-year-old son found a gun left on a bed and accidentally shot his older brother in the head while the children were playing video games. The couple were arrested in the boy’s death after police said they found inconsistencies in the mother’s account of the shooting.

Investigators also became suspicious when Kansas Lavarnia showed up at the home with a crudely bandaged gunshot wound on his arm. It looked to have been punctured multiple times, possibly with a screwdriver, to camouflage the injury, authorities said.

In the past, authorities have declined to say who they believed was responsible for shooting the boy and his father. But Kansas Lavarnia’s attorney said in court records a month ago that the theory pushed by prosecutors is that Wendy Lavarnia shot her son and husband.

The 29-year-old told authorities that her husband was out shopping at the time of the shooting. He showed up at the family’s home after police had arrived.

Clare Schum, an attorney for Wendy Lavarnia, said in an email that her client denies firing the gun and that prosecutors have not disclosed evidence or witness statements to her to support the theory that she did.

Amanda Jacinto, a spokesman for the Maricopa County Attorney’s Office, declined to comment on the state’s theory of the case.

Jacinto said in an email that the murder charge against Kansas Lavarnia was dismissed in mid-October after prosecutors investigated further and reviewed the victim’s autopsy and then determined they would not be able to prove all the elements of the crime beyond a reasonable doubt.

Authorities said the parents delayed calling 911 for medical care for their son so they could clean up evidence in the house. They say the lack of visible blood and the extent of blood residue implied that a significant amount of time had passed before the mother called 911. Prosecutors say evidence of blood was found in the trunk of the vehicle that Kansas Lavarnia drove to his home.

Kansas Lavarnia’s lawyer cited the dismissal of the murder charge when he asked a judge to lower his client’s $1 million bond to $25,000.

Trial for the couple has been postponed, and no new date has been set.

Follow Jacques Billeaud at twitter.com/jacquesbilleaud. His work can be found at https://www.apnews.com/search/jacques%20billeaud .