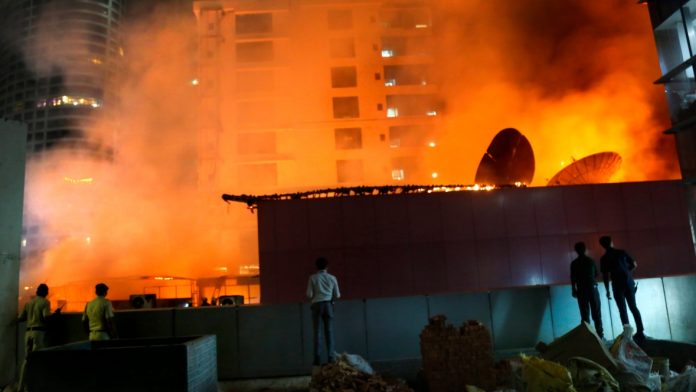 Fire swept through a rooftop restaurant in the Indian financial hub of Mumbai early on Friday, killing at least 14 people, most of them women attending a birthday party, including the celebrant who had just turned 28, police and family said.

The fire department received a call about the blaze in a commercial building in the Kamala Mills district around 3 in the morning, an official said.

“The fire brigade and police are investigating the cause of the fire, but we still don’t know how it started,” a senior police officer told Reuters.

Kamala Mills is home to several corporate offices and is a major night life district, with several high-end pubs and restaurants opening up in recent years.

The fire started at a 1 Above, a popular bar-restaurant on the top floor, which engulfed the whole building in less than 30 minutes, media reported.

Several media outlets also use the compound for their offices and the offices of at least three national news channels suffered damage.

“The magnitude of the fire was huge, disrupting our operations temporarily. All our employees were evacuated safely,” the Times Network said in a press release.

Prime Minister Narendra Modi expressed his condolences. “Anguished by the fire in Mumbai. My thoughts are with the bereaved families in this hour of grief. I pray that those injured recover quickly,” the PM’s Office tweeted.