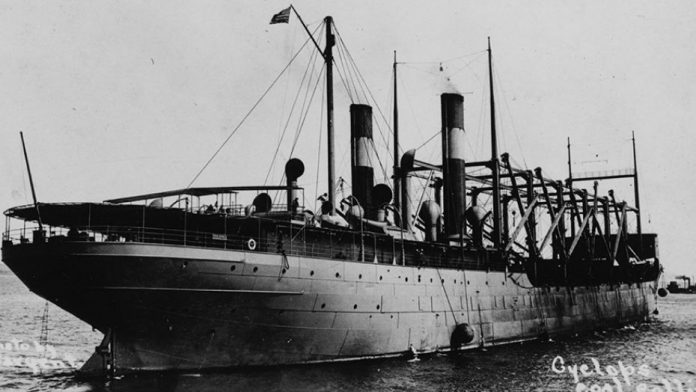 The USS Cyclops in 1913. The mammoth coal-hauling transport ship disappeared in 1918 and its whereabouts, to this day, remain unknown.

(US Naval History and Heritage Command)

One hundred years ago Wednesday morning, the USS Cyclops, a massive American World War I transport ship hailed as a “floating coal mine,” should have been docked in the waters off Baltimore, fresh off a journey from Brazil.

But the vessel – reported to be the Navy’s biggest and fastest fuel ship at the time – and the 309 men onboard it never pulled into the Chesapeake Bay on March 13, 1918, and its whereabouts to this day remain unknown.

“In terms of loss of life and size of ship, it’s probably the last great mystery left unresolved,” James Delgado, an underwater explorer, told the Baltimore Sun this week as recent discoveries of historical shipwrecks are renewing hopes amongst the scientific community of finally finding the Cyclops.

The 540-foot long and 65-foot wide ship, outfitted with 50-caliber machine guns to help deliver doctors and supplies to American Expeditionary Forces in France during The Great War, was last seen in Barbados on March 4, 1918. 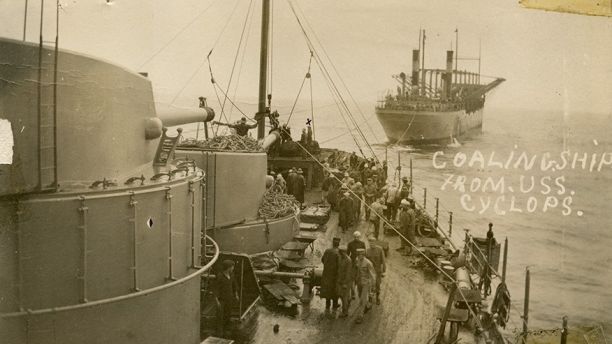 The USS Cyclops, in the background, transferring bags of coal with the USS South Carolina in 1914.

(US Naval History and Heritage Command)

Built in Philadelphia eight years earlier, the USS Cyclops was capable of transporting 12,500 tons of coal and could lift two tons of it in single buckets along cables that ran along the ship, leading newspapers to call it a “floating coal mine,” according to the Baltimore Sun.

But on its final journey, the Cyclops was loaded up with 10,000 tons of manganese ore – a denser and heavier cargo – and stopped at the Caribbean island for nine days to resupply before vanishing into the horizon.

“Numerous ships sailed to locate the collier as she was thought to have been sunk by a German submarine,” the Naval History and Heritage Command said. “Her wreck has never been found, and the cause of her loss remains unknown.”

“As a Navy veteran, I feel I have a duty to honor the crew members on the USS Cyclops who never returned home to Baltimore, and the families they left behind.”

Two months after the ship failed to reach Baltimore, Franklin D. Roosevelt, who then was an Assistant Navy Secretary, announced the Cyclops and all of its crew were presumed lost at sea, resulting in what remains the largest loss of life in Navy history unrelated to combat.

Nothing from the ship has been found. No wreckage, oil slicks or debris. Not even a distress call. And speculation has raged throughout history, leading some to claim wild theories involving the Bermuda Triangle, giant squids and meteorites, the Baltimore Sun reported.

“There has been no more baffling mystery in the annals of the Navy than the disappearance last March of the U.S.S. Cyclops,” it quoted Navy Secretary Josephus Daniels as saying at the time. “There has not been a trace of the vessel, and long-continued and vigilant search of the entire region proved utterly futile.”

But recent deep sea discoveries of American ships, such as the USS Lexington — lost at the Battle of Coral Sea in 1942 and found last week — and the USS Ward, found in the Philippines in December, both by an expedition crew led by Microsoft co-founder and philanthropist Paul Allen, are giving explorers hope the Cyclops could be next. 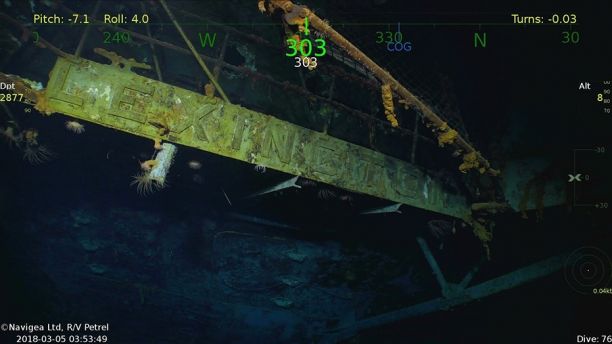 The nameplate of the USS Lexington, which was struck by multiple Japanese torpedoes and bombs on May 8, 1942, is visible during a recent expedition that uncovered the ship.

“The short list keeps getting shorter these days as technology steps in,” Delgado told the Baltimore Sun. “Things can be found. It’s just a question of time and money.”

Marvin Barrash, who has spent more than a decade researching the Cyclops, believes it could be sitting in the deepest part of the Atlantic Ocean, the Puerto Rico Trench, which extends more than 27,000 feet below the surface. He is now working with Rep. Andy Harris, R-Md., to build the ship’s first monument.

“As a Navy veteran, I feel I have a duty to honor the crew members on the USS Cyclops who never returned home to Baltimore, and the families they left behind,” Harris said in a statement.

Barrash, a great nephew of one of the firemen on the ship, told the Baltimore Sun that he just wants the ship “to be found.

“I want the 309 to be at rest, as well as the families,” he said. “It’s something everybody needs: some resolution.”