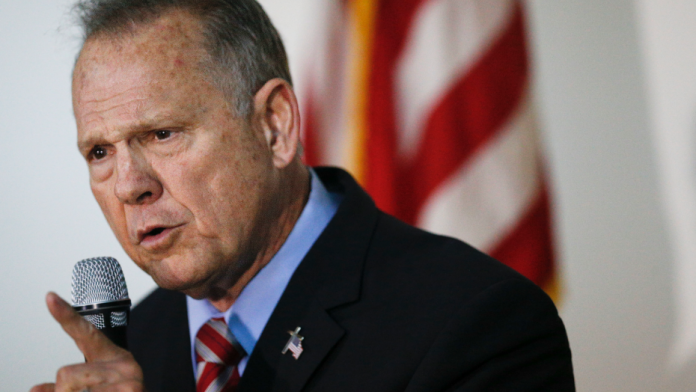 THEODORE, Ala. –  Republican Roy Moore, his Senate bid stung by allegations of sexual misconduct, is seeking to steer the Alabama race to hot-button social issues highlighted by his opposition to abortion.

Newly back on the campaign trail since the uproar the accusations caused, Moore has used campaign stops to rally his evangelical base on social issues, including abortion, juxtaposing his desire to one day outlaw abortion altogether against Democratic rival Doug Jones’ support of abortion rights.

In a Wednesday night speech at Magnolia Spring Baptist Church in south Alabama, Moore drew loud applause when he said he would work to defund Planned Parenthood and reverse the 1973 U.S. Supreme Court decision that legalized abortion.

“On abortion I would not fund Planned Parenthood. I work to overturn Roe versus Wade because I believe it is an unconstitutional decision,” Moore said.

Moore’s campaign even suggested on social media that Jones, if elected, would seek to put another pro-abortion justice on the Supreme Court.

“#Abortion Jones will give us another #ProChoice, pro-abortion #RuthBaderGinsburg style judge on SCOTUS. We can’t let that happen,” Moore’s campaign tweeted Tuesday.

Democrats often face long odds in this conservative Southern state where opposition to abortion cuts across socioeconomic, gender and racial lines. The state’s voters next year will decide on a proposal that would add anti-abortion language to the Alabama Constitution.

Jones has said he is pro-abortion rights. He supports keeping the law as it is.

Moore, who has long had backing from a wide swath of the state’s evangelical voters, built a following over his religious-themed political stances. Those have included opposition to same-sex marriage, support for displaying the Ten Commandments in public and his belief that the U.S. Constitution is founded on God.

Moore’s campaign has been wounded by accusations of sexual misconduct, decades ago, made by women who were then teenagers. His recent campaign stops have aimed at both defending himself against the allegations and rallying his base ahead of the Dec. 12 election.

Moore’s south Alabama stop was momentarily interrupted by a heckler. “All the girls are lying?… Why would they lie?” the man shouted before he was escorted from the church by security as some church members shouted for him to get out.

Jones called the emphasis on abortion by Moore an effort to divert attention from the sexual misconduct allegations.

“You expect them to do something like that to try to divert attention from the very serious allegations that he’s facing and the very credible statements from the women” who came forward, Jones said earlier this month.

Moore accused Jones of supporting “full-term” abortions. The political fact-checking website, Politifact, called that term “disconnected” from the reality of when abortions occur.

Political observers note that Jones must peel away some Republican support from Moore for a win, but that the abortion issue is one Republicans have long used successfully in campaigns in Alabama.

“I think it’s murder, and we’ll pay for it eventually,” Glennan Palframan said before hearing Moore speak in south Alabama.

Carol Summers, who traveled to hear Moore speak in Henagar, Alabama, said opposition to abortion was a major reason she votes Republican and will vote for Moore.

She said some of the accusations against Moore “may be true” but that it was also a long time ago.

“Democrats are for abortion, and I don’t believe in that in all,” Summers said.