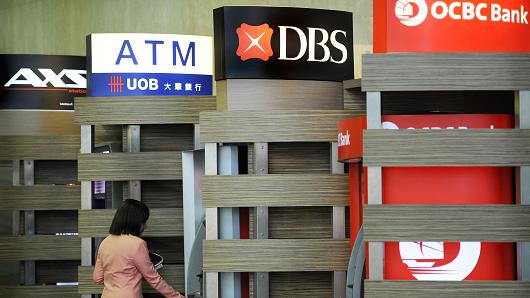 The ratings agency said deterioration in the asset portion of balance sheets had peaked, particularly among oil and gas exposure.

“Improving growth momentum in Singapore’s key trade partners will support export-oriented manufacturers and offset some lingering weaknesses in the local economy,” Eugene Tarzimanov, a senior credit officer at Moody’s, said in a statement on Wednesday.

Moody’s said it expected Aaa-rated Singapore’s real gross domestic product growth to rise to 2.2 percent this year and 2.5 percent in 2018, from 2 percent in 2016, with credit growth rebounding to mid-single digits after being flat in 2016.

Singapore’s three banks — DBS, United Overseas Bank and Oversea-Chinese Banking Corp. — were required to put aside more money to cover their exposure to bad loans to the beleaguered sector.

But after earnings were released earlier this month, DBS CEO Piyush Gupta told CNBC that, although he expected more bad loans from the oil services sector, the worst was likely over.

In December, Moody’s downgraded the three banks to a1 from aa3, citing increased asset quality and profitability risks.

But the ratings agency kept the banks’ senior debt rating at Aa1, three notches above the baseline rating, as Moody’s expected the Singapore government would step in with strong support if the banks needed it.