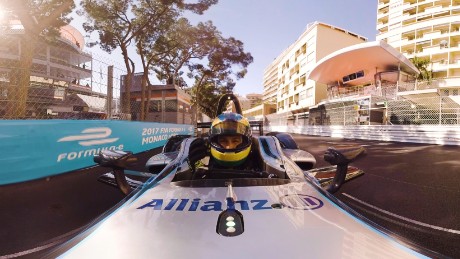 Finnish veteran Raikkonen pipped his teammate Vettel for top spot on the grid, but Hamilton failed to make the top-10 shootout and will start from 13th with little prospect of repeating his victory of 2016 in the principality.

Hamilton, struggling with the balance of his car, had to abort his final flying lap of the second session as Stoffel Vandoorne went into the barrier in his McLaren, leading to a yellow flag.

“That’s me out,” said an exasperated Hamilton over his race radio, knowing his chances of cutting Vettel’s six-point lead in the F1 title race are now remote.

‘It will be a real struggle just to get into the points tomorrow, so the aim is to salvage a point or two,” he later told BBC Sport.

Mercedes has won the last five Monaco GPs, but its hopes will probably now rest with Valtteri Bottas, who qualified third fastest, fractionally behind Vettel.

Raikkonen, calling on all his experience, laid down the gauntlet with a one minute 12.178 second clocking on the twisting street circuit, a time that was unable to be matched by the other front runners.

“Obviously, we will try to make the best of it tomorrow,” said Raikkonen, who last topped the grid positions at the 2008 French Grand Prix, a gap of 128 races.

If he, or Vettel, claims the victory Sunday, they will become the first Ferrari driver to win in Monaco since the great Michael Schumacher in 2001.

Vandoorne’s off aside, it was an improved qualifying performance for McLaren as both he and the returning Jenson Button made the final qualifying shootout.

Button, coming out of F1 retirement to replace Fernando Alonso, who is racing the Indy 500 Sunday, finished ninth quickest but will start from the rear of the grid after receiving a 15-place penalty for an engine change.

Belgian Vandoorne, who did not go out in final qualifying, drops three places after a penalty from a previous race.

Button’s penalty meant Hamilton moved up a place after only posting the 14th best time, but the omens are not good for any driver not on the front or second row.

The polesitter has won 28 of the previous 63 Monaco GPs, with the top three on the grid taking the victory 53 times.

A glimmer of hope for Hamilton, and others, is the precedent of Frenchman Olivier Panis, winning from 14th on the grid in a chaotic, rain-hit race.

But the weather forecast for Monaco Sunday is set fair and with it a likely Ferrari victory.