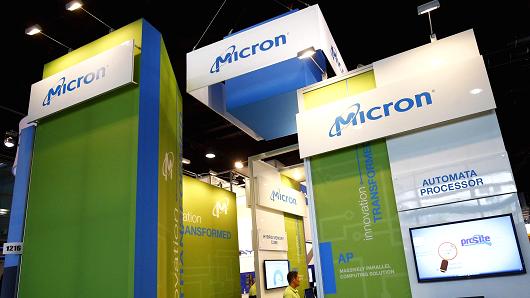 A booth of Micron Technology at an industrial fair in Frankfurt, Germany, July 14, 2015.

Semiconductors have been underperforming lately. In the past month, the SOXX ETF has fallen about 5 percent, helping to drag down the overall tech sector lower.

Tech stocks have been the best performers this year, rising more than 16 percent. But the space has been under pressure lately given its high valuation.

Micron had traded higher in the premarket Friday on the back of better-than-expected quarterly results on Thursday.

Kevin Cassidy, semiconductor equities analyst at Stifel, told CNBC in an email that Micron’s stock decline is a combination of selling on the news and concern that the Chinese may disrupt the semiconductor market.

He added that Friday is the last trading day of the quarter, and Micron has been a big gainer this year, which could be adding to the stock’s volatility. Micron has risen more than 37 percent this year.