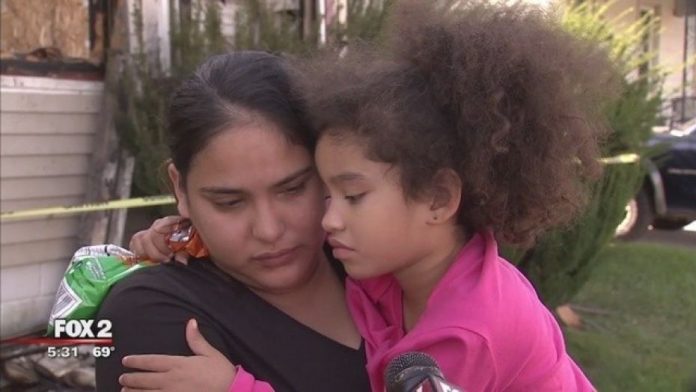 Rosa Conley with her daughter, Jamirah, who saved the family from a fire.

A 5-year-old girl became an unlikely hero, saving her family from flames after a fire broke out in her Michigan home early Wednesday morning.

The fire began around 5:30 a.m., while Rosa Conley, Isaiah Smith and their two daughters were sleeping, FOX47 reported. Jamirah, 5, was the first to notice the blaze after the heat woke her up. She quickly ran to her parents’ room.

“When I woke up, I saw the fire and I was scared, so I ran in,” Jamirah said.

The little girl said she knew what to do because of fire safety lessons she learned in school, WDIV Local 4 reported.

Conley said she believed if her daughter hadn’t come to wake the other members of her family up, they wouldn’t be alive.

“I just remember her coming in waking me up, and, when I looked up, I could see she was getting ready to tell me,” Isaiah Smith, Coley’s boyfriend, said. “And once I seen the fire, I just grabbed [the children] and put them in the room and shut the door.”

Smith and Conley initially tried extinguishing the fire themselves.

“I took the garbage out of the garbage can in the bathroom,” Conley said. “We were filling it up with water trying to put the fire out, it wouldn’t go out.”

Within three minutes, the entire house was engulfed in flames and the family was beginning to feel overwhelmed by the smoke.

“After I kept trying to put the fire out, I couldn’t breathe anymore, so at that point, I just knew I had to get everyone out the house,” Smith said.

The family escaped without injuries — thanks to Jamirah.

Investigators do not yet know the cause of the fire, but believe it could have been the result of an electrical problem.

After losing their home, the family is now living in a nearby hotel. They’ve set up a GoFundMe account to help with expenses.