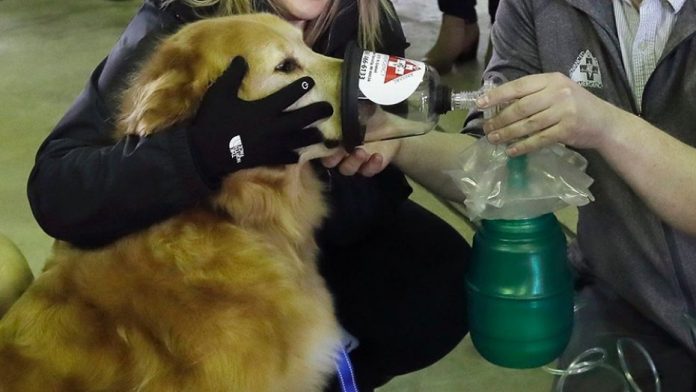 An oxygen mask is demonstrated on Smokey, a golden retriever, on Thursday in Detroit. The Detroit Fire Department is the recipient of more than 800 pet oxygen masks.

A reported donation of more than 800 pet oxygen masks will help the Detroit Fire Department save beloved pets in the event of an emergency.

With the help of donations from local businesses and organizations, the Detroit Public Safety Foundation was able to give 278 pet oxygen mask kits, which include more than 800 masks, to the department, Fox 2 Detroit reported Thursday. The foundation helps to facilitate donations from the community on behalf of the city’s police and fire departments. 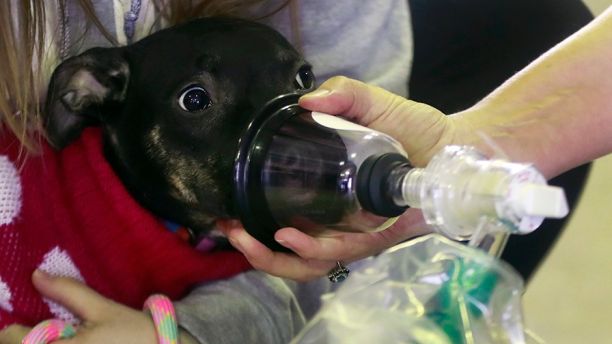 An oxygen mask is demonstrated on Juliet, a pit bull mix.

The spur of donations followed a house fire in January, from which responders rescued 15 of the 17 dogs inside, the outlet said. After the event, the department reportedly noted their limited supply of the specialty equipment needed when rescuing the animals.

The contributions were announced by Patti Kukula, who leads the Detroit Public Safety Foundation. In a Facebook post, the foundation thanked those involved for their “donations and dedication to keeping our pets safe.”

“DFD now has enough kits for every piece of fire apparatus to be outfitted with this specialty equipment,” the post said. “When responding to fires, DFD is always mindful of pets and does everything possible to save animals trapped in fires.”