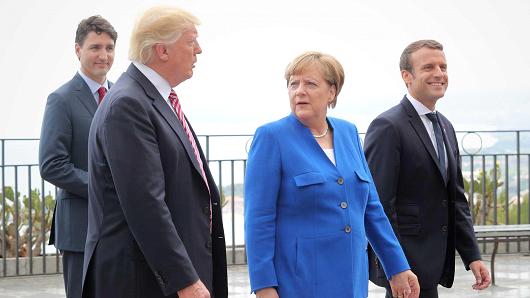 Justin Trudeau, Donald Trump, Angela Merkel and Emmanuel Macron at the G7 Taormina summit on the island of Sicily on May 26, 2017 in Taormina, Italy.

In the aftermath of Britain’s departure from the European Union and the U.S.’s withdrawal from the Paris climate pact, the bloc’s remaining members must take greater responsibility for “existential” challenges the world faces, German Chancellor Angela Merkel said.

“We are convinced that climate change is one of the greatest challenges facing humanity, an existential challenge,” she told the German parliament. “We cannot wait to act until the science has convinced every last doubter.”

She said she had agreed a plan with France’s newly elected President Emmanuel Macron to deepen cooperation in the European Union and the Eurozone, adding that the EU needed to take on more responsibility for tackling security concerns it faced, including a threat from “terrorism”.

The bloc’s remaining members would remain united in their negotations with Britain over its planned departure from the EU, she added in Thursday’s speech to lawmakers.