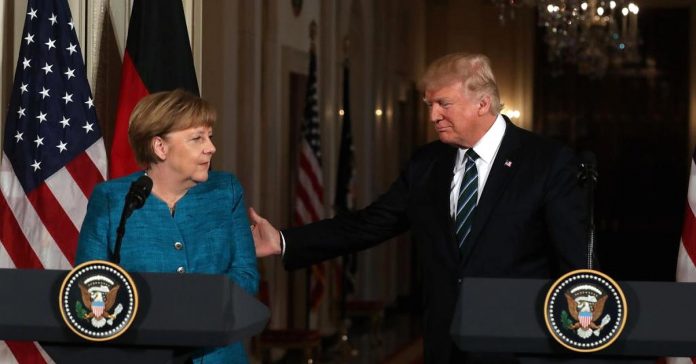 Merkel indirectly warned Trump he risked isolating the United States: “Anyone who today puts on national blinkers and no longer has eyes for the world around him is, I am convinced, ultimately out on a limb.”

Her spokesman, Steffen Seibert, told reporters Merkel felt it was right to flag differences in Germany’s ties with the United States in order to maintain healthy relations.

“Because trans-Atlantic relations are so important to this chancellor, it is right from her viewpoint to speak out honestly about differences,” he said, stressing that the trans-Atlantic ties “are a firm pillar of our foreign and security policy” Interior Minister Thomas de Maiziere stressed Germany’s “excellent” security ties with the United States.

German Foreign Minister Sigmar Gabriel said the West had become weaker as Washington increasingly put U.S. interests first. He said Trump’s administration, for example, was unlikely to do much to tackle the causes of the migrant crisis – climate change, wars and persecution.

He referred to the “loss of the U.S. as an important nation” and said that while it was important to maintain dialogue with Washington, Europe needed to become stronger and Germany needed to be more prepared to work with its EU peers.