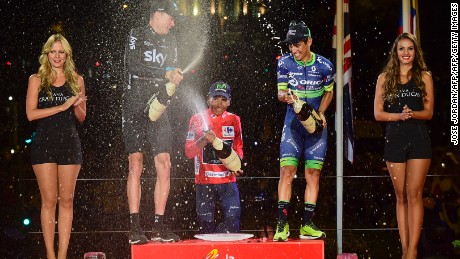 It’s a change organizers of the three-week race, which started August 19, have made after much discussion in Spain about all-female podiums in sports including cycling and motor racing, which is increasingly seen as old-fashioned and sexist.

“We couldn’t stay out of the debate because we are using all girls on the podium,” Vuelta race director Javier Guillen told CNN by phone.

“But the first thing we want to keep is those jobs for those professional people who are doing very well,” he said.

“We are not removing the ladies from the podium, but what we are doing is introducing a male host, we will combine a man and woman in an alternative way.”

READ: Why a race through Spain starts in France
READ: ‘A man with no platform, is a lost man,’ says Armstrong

Although Guillen stressed the move was a “small change,” the Vuelta is in fact the first of the so-called Grand Tours of cycling to end the decade-long tradition.

The Tour de France and the Giro d’Italia continue using female hostesses to give the riders their prizes and flowers — and often a peck on the cheek — at the end of each stage.

But at the start of the season, the UCI World Tour opener in Adelaide, Australia replaced its podium girls with junior cyclists on the request of the South Australian government, which partially paid for the race, Cycling Weekly reported at the time.

Cycling races in Mallorca, Catalunya and Valencia have since followed suit and also abandoned the podium girls.

READ: What’s squeezing a woman’s bottom got to do with sport?
READ: Grid girl power: The style and substance behind the glamor

The move was welcomed by some riders, including Team Sky’s Mikel Landa of Spain, who told the country’s El Correo newspaper the tradition was sexist.

“That is the line that we should go to. Podium girls presenting the prizes is an old tradition, it’s like treating the women as objects, and undervaluing them.”

Landa added: “This is a deeply rooted custom and nobody dares question it.

“And you have to admit that the women who go up on the podium are there because they are beautiful and have nice figures, and that’s not the image you’d want to project,” he said.

Although Guillen emphasized the Vuelta podium is “very elegant” and has “absolute dignity” he said he didn’t hesitate to make the change.

“When they say you have to introduce some men together with the women, it’s something that we say, ok, no problem,” said Guillen said.

“Because we have a stage for everybody. And this is something that is not bad for the race, I don’t see anything bad to introduce these changes, so that’s what we’re doing, that’s all.”