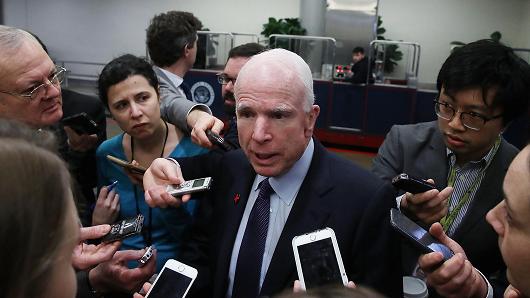 John McCain (R-AZ) fields questions from reporters on the resignation of Michael Flynn and the Trump administrations connection to Russia, on Capitol Hill Feb. 15, 2017

U.S. Senator John McCain said Russian President Vladimir Putin is a bigger threat to global security than ISIS, and warned that the Senate would push for sanctions against Moscow for its alleged interference in the U.S. election.

McCain, a leading foreign policy voice in the U.S. Congress, was speaking in an interview in Australia, where he has held security talks on his way to a defense summit in Singapore.

“I think he (Putin) is the premier and most important threat, more so than ISIS,” McCain said in an interview on Australian Broadcasting Corp television.

He said while there was no evidence the Russians succeeded in changing the U.S. election outcome, they were still trying to change elections, including the recent French vote.

“I view the Russians as the far greatest challenge that we have,” said McCain, who is chairman of the U.S. Senate Armed Services Committee.