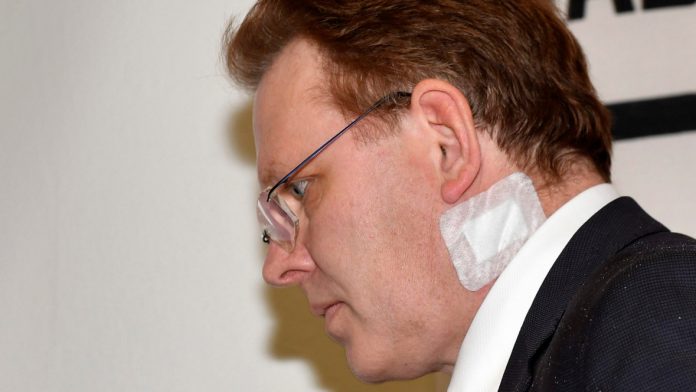 The conservative mayor of a small town in western Germany who is known for his liberal policy toward asylum seekers was stabbed in the neck on Monday evening and seriously hurt.

A man who witnessed the attack in the town of Altena told German television that a man, probably under the influence of alcohol, stabbed the mayor in the neck with a 30-centimetre-long knife while shouting criticism of his asylum policy.

“The security authorities believe that there was a political motive to this attack,” said Armin Laschet, premier of the state of North Rhine-Westphalia.

The attacker was identified by authorities as 56-year-old German national Werner S., whose full name was withheld because of German privacy laws. He was arrested and state prosecutors in Hagen are treating the incident as a an attempted-murder case, media reported. No one was immediately available at the prosecutors office.

The 57-year old mayor, Andreas Hollstein, is a father of four and a member of Chancellor Angela Merkel’s conservative party. He appeared shaken as he answered reporters’ questions the day after the attack.

“I feared for my life,” he said, adding that it appeared the man had intentionally chosen him as a victim. “If you ask me whether that knife in his pocket was for me, I’d answer with a yes,” he said.

The mayor said he was at a local kebab restaurant around 8 p.m. local time on Monday, when the attacker approached him, held a knife to his throat and took him to task over his policies toward refugees. It was only with the help of the restaurant’s owner and his son that the man could be overpowered.

Hollstein was taken to the hospital but discharged later Monday. He said he had a 15-centimetre-long cut on the left side of his neck.

Under his leadership, the town of Altena has taken in more refugees than it was allocated. Hollstein has also written a book about his fight against the far-right.

‘If you ask me whether that knife in his pocket was for me, I’d answer with a yes.’
– Andreas Hollstein, mayor of Altena

Merkel and many other politicians have expressed their shock at the attack.

“I am horrified by the knife attack on the mayor Andreas Hollstein — and very relieved that he can already be back with his family. Thanks also to those who helped him,” Merkel said via her spokesperson on Twitter.

The incident is reminiscent of the stabbing two years ago of a candidate for mayor of Cologne, Henriette Reker, in an anti-refugee attack. She was seriously hurt but went on to win the election and become mayor.

Germany took in more than one million asylum seekers between 2015 and 2016, mostly from war-torn countries such as Syria, Afghanistan and Iraq. The influx saw an outpouring of support from many Germans who wanted to help the refugees, but also a sharp rise in the number of attack against migrants and sometimes also against their supporters.