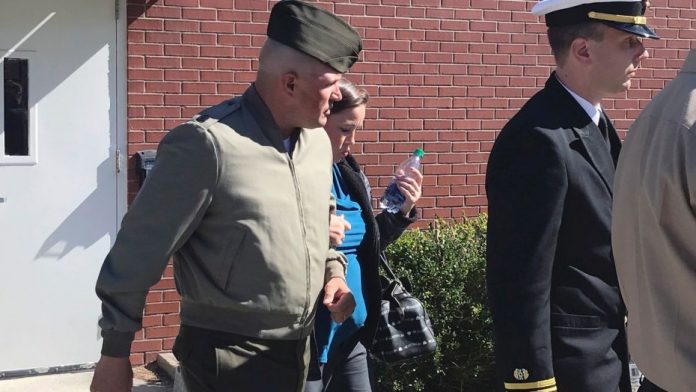 A Marine Corps drill instructor convicted of physically abusing young recruits, one of whom killed himself, was sentenced Friday to 10 years in military prison.

The eight-man jury at Camp Lejeune, N.C., on Friday also sentenced 34-year-old Gunnery Sgt. Joseph Felix to forfeiture of all pay, reduction of his rank to private and a dishonorable discharge.

Felix had been found guilty Thursday of hazing and maltreatment of recruits at the Marine Corps’ Parris Island, S.C., boot camp. The jury of five sergeants and three officers determined that Felix punched, kicked and choked recruits, zeroing in on three Muslim military volunteers for special mistreatment.

In March 2016, Raheel Siddiqui, 20, a Pakistani-American from Taylor, Mich., committed suicide by jumping off a stairwell after Felix yelled at him and slapped him, prosecutors said. Siddiqui’s family filed a $100 million wrongful death lawsuit last month against the Marine Corps.

Felix was one of six drill instructors at Parris Island charged with abuse after Siddiqui’s death. Eleven others faced lesser, administrative discipline

The government did not charge Felix with any crime directly related to Siddiqui’s death. The judge, Lt. Col. Michael Libretto, did not allow testimony about whether Felix’s actions were responsible for the recruit’s death.

Two other Muslim recruits said Felix once pressured them into an industrial clothes dryer and turned it on.

Trainee Lance Cpl. Ameer Bourmeche testified Felix forced him into a clothes dryer and turned it on as Felix demanded he renounce his Islamic faith. Bourmeche testified he twice affirmed his creed and twice Felix and another drill instructor sent him for a bruising, scorching tumble inside the dryer. After a third spin, Bourmeche said he feared for his life and renounced his faith. The drill instructors then let him out, he said.

Felix also was convicted of ordering Rekan Hawez, a native of Iraqi Kurdistan, to climb into the dryer. The machine was never turned on.

The jury decided Felix also roused nearly two dozen recruits from their sleep, ordered them to lie on the floor, and then walked on their bodies along with two other drill instructors.

Felix was found guilty as well of ordering Bourmeche to simulate chopping off the head of a fellow Marine while reciting “God is great” in Arabic.

Prosecutor Lt. Col. John Norman said Felix “picked out Muslim recruits for special abuse because of their Muslim faith. He degraded their religion and put them in industrial appliances.”

Norman told the jury that Felix was “drunk on power, and sometimes Fireball whiskey.”