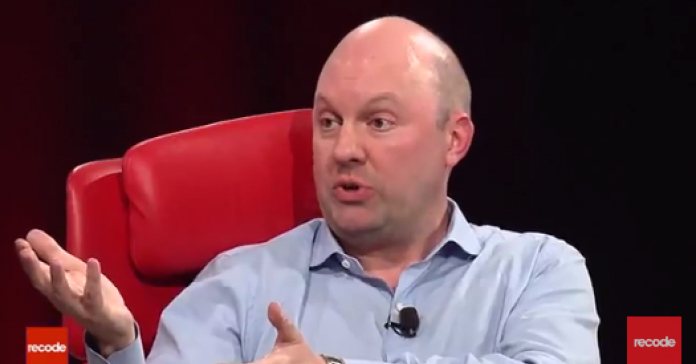 Venture capitalist Marc Andreessen says we’ve got this whole artificial intelligence thing all wrong. In fact, the fear of the machines taking over has been a familiar one throughout history.

“This is the panic every 25 to 50 years,” Andreessen said Tuesday evening at Recode’s annual Code Conference in Rancho Palos Verdes, California. “It never comes true.”

Andreessen, who developed the Netscape web browser and is the co-founder of VC firm Andreessen , likens today’s obsession with robots displacing people to the automobile 100 years ago and the fear that a new form of transportation would replace human labor. Instead, the auto industry turned into one of the nation’s biggest employers and spawned a whole new market for people like street pavers.

The self-driving car, Andreessen said, will not only save lives but increase productivity in ways that perhaps we’re not even considering. The real problem in the labor market isn’t an oversupply of people, but “we don’t have enough workers” to fill the existing jobs. That situation could get a whole lot worse if “immigration policies continue,” he said.

As with any emerging trend in technology, Silicon Valley is throwing excessive amounts of money at artificial intelligence. Venture investors are funding robots of every shape and size, creating “one of the biggest booms I’ve ever seen,” Andreessen said. And like with the early days of the internet and mobile, there will be a ton of losers, but a few big transformative winners.

“Of course we’re going to overdo it,” he said. “Out of that will come defining companies of the era.”

Andreessen, who coined the phrase “software is eating the world,” is also investing in industries that have yet to experience the types of efficiencies that technology is supposed to create. The three markets of healthcare, and construction account for 88 percent of all price inflation and are threatening to “eat the economy,” he said.

Andreessen said he’s investing in companies that are trying to drive down costs in those areas. He highlighted Udacity, a developer of online classes, and said his firm is going “very aggressive” in health care.