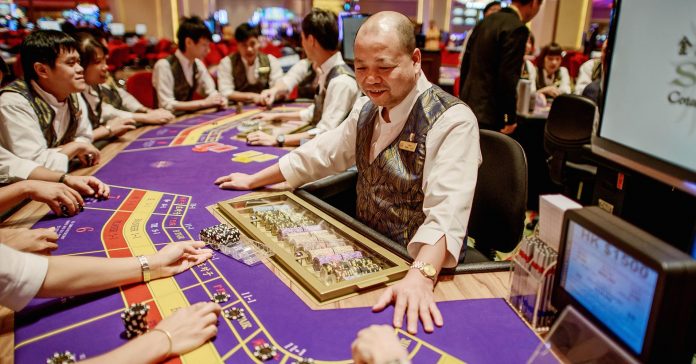 As June ends, the gaming business in Macau appears have to have notched another big win on strength in the lucrative VIP segment.

According to Consensus Metrix, analysts are looking for Macau’s June gross gaming revenues (GGR) to soar nearly 27 percent from a year ago and they see July also producing a double-digit increase. However, some analysts are predicting June could produce GGR growth as high as 33 percent compared with the year earlier.

“Channel checks through the first three weeks of June show the month is tracking to be well north of 30 percent,” said Vitaly Umansky, an analyst at brokerage Sanford C. Bernstein. “The strength in the VIP side continues to surprise everybody.”

That said, there were easy comparisons with June compared with a year ago, when Macau was still reeling from a downturn blamed on the Beijing government’s corruption crackdown on the junket business. The so-called junkets or specialists bring in the high-value Chinese gamblers to the Macau casinos.

Macau GGR for May beat expectations and came in at 23.7 percent, well ahead of the 16.5 percent increase expected by analysts. June is expected to mark the eleventh-consecutive month of gaming growth in Macau, the world’s largest gambling mecca.

The Macau Gaming Inspection and Coordination Bureau is expected to release its June GGR report Monday. It was unclear if this week’s visit of Chinese President Xi Jinping to Hong Kong had impacted Macau’s business in the final days of the month.

Xi, who arrived Thursday on a three-day visit, was expected on Saturday to visit the construction site for a multibillion-dollar bridge that will reduce the travel time from Hong Kong to Macau from around there hours to about 30 minutes. Analysts expect the bridge’s opening later this year to make Macau even more attractive for tourism and convention business, including filling more rooms mid-week for the hotel-casino operators.

Regardless, near-term concerns about MGM Resorts’ casino business in Macau and Las Vegas led Deutsche Bank analyst Carlo Santarelli to cut his forecasts for MGM Resorts. The analyst is also cautious on intra-quarter trends but left his “buy” rating in place for the casino operator’s long-term outlook.

On the news, MGM stock fell almost 5 percent on Friday. Wynn Resorts shares had been up as much as 2 percent intraday but eased to finish up about 1 percent. Las Vegas Sands was up less than 1 percent.

MGM’s business is levered mostly to the Las Vegas market, but it plans to open a new resort in Macau’s Cotai district later this year that will increase its hotel capacity three-fold in the larger Macau market. Las Vegas Sands has the biggest exposure in the Macau market among the top-3 U.S. casino companies and is largely focused on the mass market.

Last summer, the $4.1 billion Wynn Palace opened its doors in Macau’s Cotai district. Its recent VIP volumes have been tracking higher than Macau, and its mass market volumes also have been impressive.