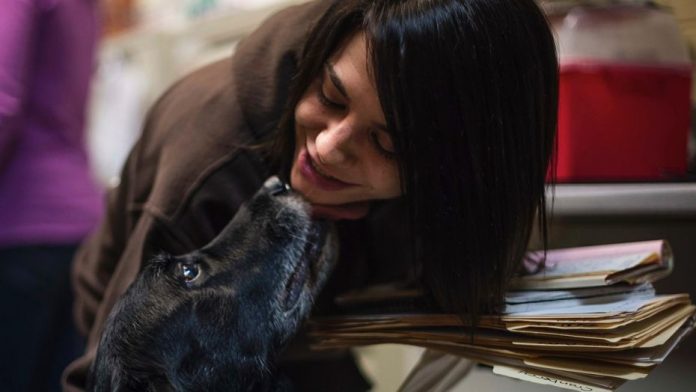 Jody Berisko, an employee at Animal Protectors of Allegheny Valley gets a kiss from Abby on Jan. 30, 2018.

That’s what a Pennsylvania family learned recently when they recovered their black Labrador mix, Abby, who had run away 10 years ago from the family’s home in Apollo, about 33 miles east of Pittsburgh.

After some time went by, Debra Suierveld and her family assumed Abby had died. But on Jan. 27 Suierveld received word that someone had found their dog.

Abby showed up on George Speiring’s front porch in Lower Burrell, 10 miles west of Apollo. Speiring contacted Animal Protectors of Allegheny Valley, which discovered the dog’s microchip and was able to contact Suierveld.

Someone had taken good care of Abby over the years. The dog was in great health and still remembered some things the family taught her, Suierveld said.

Suierveld called her 22-year-old daughter, who is a student at Miami University, in Oxford, Ohio, to share the news.

It feels like a part of my kids’ childhood is back, part of our family is back. It’s pretty awesome.”

“She cried,” Suierveld told the Tribune-Review.

Suierveld’s family has planned a reunion dinner for Sunday to welcome Abby back.

“It feels like a part of my kids’ childhood is back, part of our family is back,” Suierveld said. “It’s pretty awesome.”