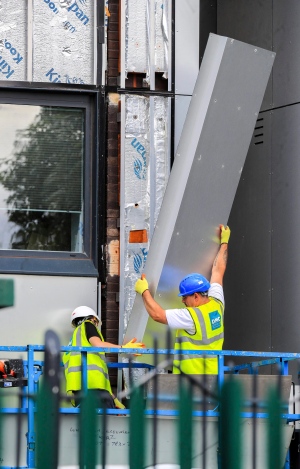 The head of the local authority responsible for a London tower block ravaged by fire this month resigned Friday, as pressure increased for more accountability in the disaster that killed at least 80 people.

Nicholas Paget-Brown, who had previously resisted calls to quit as leader of Kensington and Chelsea Council in the two weeks since the blaze, stepped aside Friday after being rebuked by Prime Minister Theresa May.

Paget-Brown initially sought to bar journalists from the meeting, then scrapped the session after media organizations won an injunction allowing reporters to be present. Paget-Brown said that the presence of the media would “prejudice” a public inquiry into the disaster planned by the central government.

Opposition Labour Party Coun. Robert Atkinson, whose ward includes Grenfell Tower, challenged Paget-Brown loudly, yelling: “An absolute fiasco, this is why I am calling for your resignation.”

Citing a court ruling that journalists must be allowed to attend, May’s office pointed out that it was vital for people to retain confidence in democratic systems.

“The High Court ruled that the meeting should be open and we would have expected the council to respect that,” the prime minister’s office said in a statement.

On Friday afternoon, Paget-Brown said that “as council leader I have to accept my share of responsibility” for perceived failings in the response to the disaster.

“In particular, my decision to accept legal advice that I should not compromise the public inquiry by having an open discussion in public yesterday, has itself become a political story,” he said.

“And it cannot be right that this should have become the focus of attention when so many are dead or still unaccounted for.”

Paget-Brown had previously acknowledged that things had gone wrong in dealing with the aftermath of the fire and apologized.

The council, which owns Grenfell Tower, also faced criticism Friday after reports that it chose a more flammable material over another in renovating the building to save money. Built in 1974, Grenfell Tower had recently been refurbished to add cladding to conserve energy and improve the look of the building

A report Friday in the Times of London cited documents showing that the council chose aluminum composite panels for the renovation project rather than a non-combustible zinc alternative. The decision saved the council around 300,000 pounds ($512,000 Cdn), the Times said.

Workers remove cladding from Whitebeam Court, in Pendleton, Manchester, June 26. Fire safety tests conducted on panels from around the country have revealed a 100-per cent failure rate. (Peter Byrne/PA/Associated Press)

The panels are part of the exterior cladding blamed by many experts for allowing the fire to rapidly spread throughout the building, trapping many residents in their homes before firefighters could reach them. It may be the end of the year before the final death toll is known.

Tests conducted on panels from around the country have revealed that 149 samples have failed fire safety tests — a 100-per cent failure rate. An independent panel formed to address fire safety advised landlords to follow interim measures involving checks and precautions, but didn’t require the immediate removal of all cladding.

Amid a mounting cry for accountability, the chief executive of the organization which manages Grenfell Tower also agreed to “step aside” to assist with a public inquiry into the fire. Another senior council official, Nicholas Holgate, chief executive of the Kensington and Chelsea council, has already been forced from his post.

Frustration has been high in the north Kensington neighbourhood as people left homeless struggled to put their lives back together. They’ve protested their treatment, accusing the government of ineptitude and lack of concern for their plight.

London Mayor Sadiq Khan London said residents felt let down — and that the meeting on Thursday had done little to change hearts and minds.

“The lack of confidence in the local authority has not been restored since the fire,” he said. “The idea that the first discussion from the council, that the meeting should be behind closed doors and then is abandoned because of a court order, beggars belief.”

The depth of need for the victims is great. The Red Cross said that 3.2 million pounds ($5.47 million Cdn) had been raised, and that excess donations of clothing and other goods would be distributed to charity shops nationwide to raise more cash for those who had lost everything.

Authorities have been at pains to promise accountability for the donated funds, and police have said they would “robustly investigate” anyone who tried to capitalize on the suffering of so many.

In the first such action, authorities charged Anh Nhu Nguyen, 52, on suspicion of fraud by false representation. Police said he tried to claim financial compensation by saying he had lost his wife and son in the blaze, and conned charities and the council. An investigation found that he lived in another part of London and didn’t have a wife or son.

Nguyen didn’t enter a plea Friday at Westminster Magistrates’ Court and has been ordered to remain in custody.