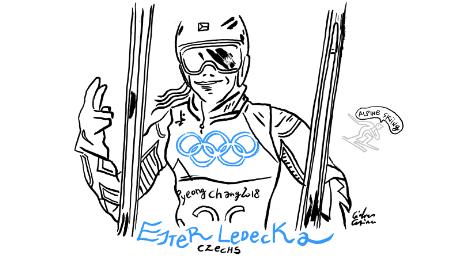 Seven days after becoming the first snowboarder to win Olympic gold in alpine skiing, the Czech followed up her success in the super-G with gold in snowboarding’s parallel giant slalom.

The two-sport star is not only the first athlete to win Olympic golds in both skiing and snowboarding, but is the only athlete to have ever competed in both events at this level.

After speeding to first in the parallel giant slalom, Ledecka said it was “fantastic” to win gold.

“It was a great day. I enjoyed every run and I’m very happy to be here and stand on the highest place.”

Paired against Germany’s Selina Joerg in the final, Ledecka took an early lead and stayed in front to hand Joerg the silver.

For Ledecka, it’s been a very long Games. She arrived for the skiing events before switching to snowboard, and on the penultimate day of the competition seemed to have lost track of time.

“Tomorrow is the finish of the Olympics, right? I was here many days, I’m really looking forward to getting home,” she said.

The 22-year-old athlete paid tribute to her team and family for giving her the support she needed to succeed at the highest levels in both sports.

“I hope they are feeling great and I say thanks to my team because they did an incredible job again. They are with me the whole time and even my skiing coach was here today. I’m really proud of them and they really deserve what has happened.”

Ledecka launched her quest for super-G gold from a starting position of 26th, and stunned the crowd to win by 0.01 seconds.

It will be remembered as one of the great moments in Olympic history.

So unprepared was she for skiing success that this daughter of a famous Czech musician turned up to her press conference wearing goggles because, in her own words, “I don’t have any make up on.”

Her victory in the parallel giant slalom, an event in which she is the reigning world champion, was far less of a shock.

From a prominent Czech family, Ledecka follows in the footsteps of her grandfather, Jan Klapac, who won ice hockey Olympic bronze in 1964 and silver in 1968 with Czechoslovakia.