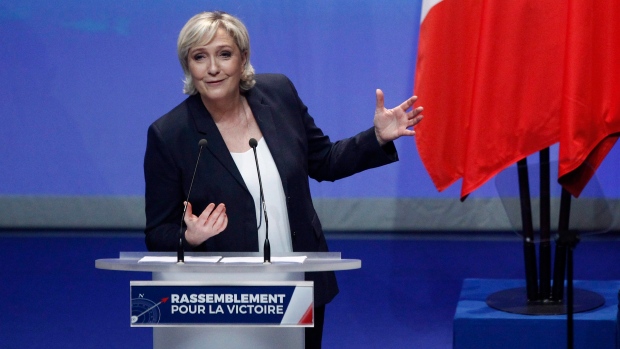 Le Pen’s proposal culminated her closing speech at the party’s two-day congress in Lille, the capital of the National Front’s northern heartland.

The name National Rally must be approved by party members in a mail vote and it’s not clear whether they will accept the change.

In another decisive change, the party severed the final ties to firebrand founder Jean-Marie Le Pen, 89, by eliminating his title of honorary president-for-life. It was part of the makeover designed to revive the nationalist party’s fortunes after the ousted founder’s daughter failed to win the presidency last year. He was barred from attending the congress.

The moves were part of the broader makeover designed to revive the nationalist party’s fortunes after Marine Le Pen’s loss to Emmanuel Macron 10 months ago.

After her defeat, Le Pen had promised a “re-foundation” of the party. New faces appeared within the leadership and new bylaws were voted on. But the party’s foundation, notably its anti-immigration agenda, remained intact.

Since taking over in 2011, Le Pen has worked to remove the stigma of racism and anti-Semitism attached to the National Front under her father’s leadership. The party, she said, has moved from a protest movement to opposition. Now, she wants it to create alliances and be seen as a party that can govern.

However, she also had to assure members who fear the party is moving away from its core. She defended the French identity and what she painted as the dark forces that threaten it.

“Globalization and Islamization are two ideologies that want to dominate the world,” she said to cheers.

‘We are in our land’

Le Pen hammered away at Macron, an upstart centrist and former investment banker, in her 80-minute speech as the incarnation of globalization that her party is battling.

“The model of Mr. Macron doesn’t lead to liberation but to alienation,” she said, “an individual attached to nothing.”

The party leader touched the chord that has resonated with sympathizers for decades, protecting France’s secular values that she claimed are being destroyed by immigration, notably by Muslims.

The National Front of the past has been a political force for decades, a kingmaker in numerous elections and a key player in others under Jean-Marie Le Pen, notably for the European Parliament, where it won more seats than any French party.

Marine Le Pen said recently that she is not opposed to ceding her leadership but wants to stay on for at least three more years.

In a nod to the apparently large contingent of members opposed to a name change, Le Pen noted that the National Front name, which the party has had since its founding in 1972, is linked to a “glorious” past. However, she said it serves as a psychological barrier for potential new members and voters, notably the word “front,” which connotes opposition.

Despite her troubles, Le Pen was re-elected to a new term as party president at the congress — the only candidate for the post.