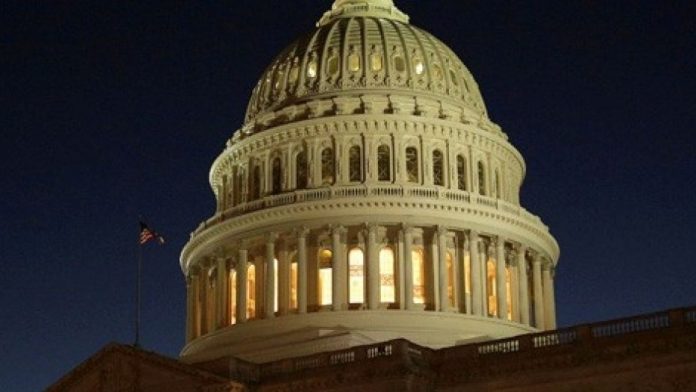 No. This isn’t a Southwest Airlines advertisement where a man mistakenly climbs into an Uber – which turns out to be the getaway car for a pair of bank robbers.

It’s Capitol Hill. And apparently, a lot of people would love to unearth a hidden off-ramp away from the building with the big white dome perched on top.

Senate Republicans scheduled a Monday afternoon press conference about the religious views of President Trump’s judicial nominees. This was on the books long before the indictments of former Trump campaign manager Paul Manafort and his business partner Rick Gates.

Nine GOP senators piled into the Lyndon Baines Johnson Room at the Capitol Monday afternoon to stand behind a lectern and in front of a row of flags. A few reporters came to ask about the nomination of Amy Coney Barrett for the federal bench and her Catholic faith. But most scribes wanted to hear what senators made of the criminal charges.

Senate Majority Leader Mitch McConnell, R- KY, launched the press conference. But after yielding to his colleagues for their remarks, the Kentucky Republican beat an exit to the doorway.

Senate Judiciary Committee Chuck Grassley, R-Iowa, began plotting an escape route early as well. A set of tall, mahogany double doors loomed directly behind the senators, though blocked by an array of four American flags. As other senators spoke, Grassley methodically reached behind the banners. He tinkered with the doorknobs to determine if they were unlocked. They were. But Grassley didn’t try to exit then. The Iowa Republican patiently stood beside Sen. Orrin Hatch, R-Utah, and dutifully listened to the remarks of his colleagues.

“Anybody have any questions for Sen. Grassley or anybody else up here on this topic?” inquired Senate Majority Whip John Cornyn, R-Texas.

“I have a question about a different Catholic named Paul Manafort,” said a reporter in the back, dispatching the room into howls of laughter.

“That’s why I said this topic,” responded Cornyn.

Another reporter asked a question on faith and public service. Then CBS’s Nancy Cordes posed her interrogative.

“And that’s not really not our job. That’s not our wheelhouse,” said Cornyn.

A portable, Tungsten TV camera light with a crew in the back then accidentally dimmed. It’s unknown if Grassley saw the cover of darkness as an advantage to execute his great escape. But Grassley made his move as soon as Cordes said “Manafort.”

Grassley swung open the back door, jostling three of the flags. Two of the flags nearly tipped over on Cornyn. The TV light came back up as the press corps shouted a cacophony of questions at Grassley. The door slammed behind the senator.

“If you would all hold on just a second,” implored Cornyn, trying to restore order.

Grassley’s departure meant it was up to Cornyn to field questions from a ravenous press corps.

Speaking of someone who wanted to get away….

Will the indictments interfere with tax reform?

“The short answer is no,” fumed Cornyn.

When the press conference broke, a scrum of reporters bee-lined for Hatch. The Senate’s President Pro Tempore left the room via Grassley’s egress – but lacking the same stealth. Hatch may hold seniority over Grassley in the Senate. But Grassley’s Houdini skills upstage those belonging to Hatch. The reporters wanted to know what the Senate’s most-senior Republican thought about Manafort.

“I’m having a rough time seeing why in the world he indicted,” said Hatch about Manafort. “I think it’s an overreach.”

Not 30 minutes later, Hatch’s office blasted around a statement which flew in the face of what the Utah Republican said in the hall.

“These are serious charges and I believe that it’s in the best interest for all parties to allow (Special Counsel) Bob Mueller to conduct a full and vigorous investigation,” read Hatch’s statement. “The Special Counsel needs the time and support necessary to get to the bottom of things.”

Perhaps Hatch wished he had ducked out prematurely, too.

It was reporters who wanted to escape the Capitol on Tuesday night. Word came around 7 pm that House Republicans were postponing their ballyhooed Wednesday rollout of the tax reform bill. GOP members of the House Ways and Means Committee huddled in a Capitol enclave belonging to Committee Chairman Kevin Brady, R- Texas, for more than two hours. What would Brady say? Why the holdup? What went wrong?

Naturally, Brady probably wanted to skedaddle too. His beloved Houston Astros were about to face the Los Angeles Dodgers in game six of the World Series. During an earlier session with the press, Brady assured reporters the bill was on target for a Wednesday release. He also prognosticated the Astros would capture their first World Series title later that night.

As it turns out, Brady was wrong on both counts – by a day. The Ways and Means Committee rolled out the legislation Thursday instead of Wednesday. And the Astros finally defeated the Dodgers in a decisive game seven Wednesday instead of Tuesday.

But confusion reigned Tuesday night. Rep. Sam Johnson, R-Texas, emerged as the first Ways and Means member out of the room.

“Who are all of these people?” Johnson asked an aide about the cadre of reporters camping outside the Ways and Means office.

Still, Johnson didn’t reply to any questions as he boarded his motorized scooter and zipped away down the Capitol corridor.

Reps. Devin Nunes, R-Calif., George Holding, R-N.C., and Kenny Marchant, R-Texas, were next. They too fled as reporters peppered them with questions about the status of the bill.

“Talk to the chairman,” hollered one, over their shoulder.

When Brady finally emerged a little after nine, he indicated that the bill was “on schedule.” But 45 minutes later, Brady’s office announced they shelved the plan for a day.

While the House wrestled with tax reform, Mitch McConnell was still trying to confirm judges this week.

Around the time of Monday’s press conference, there was concern the Senate may be in session around the clock and into Friday, whittling through a slate of circuit court nominations. In recent years, senators loathe late-night or Friday sessions. Some whispered that dilatory tactics could delay the confirmations until next week.

But then again, this was Capitol Hill and everyone wanted to get away.

By mid-afternoon Thursday, the Senate completed the slate of circuit court nominees with a final confirmation vote.

Not surprisingly, senators sprinted for the exits.