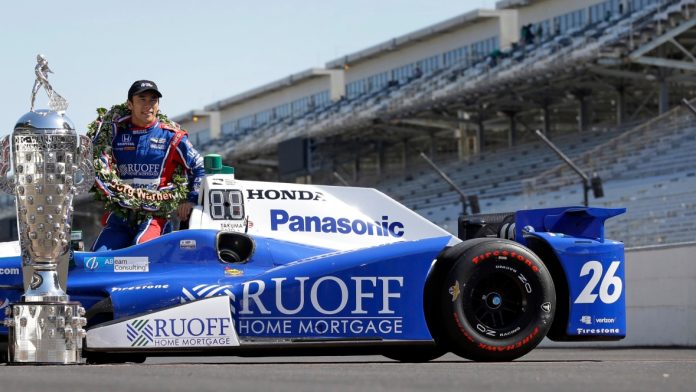 When Takuma Sato took home the checkered flag at the Indy 500 on Sunday, the Japanese race car driver wasn’t the only big winner.

BREAKING: We are excited to announce that @TakumaSatoRacer will pilot the No. 26 @RuoffHomeMtg Honda for the 101st #Indy500! #IndyCar pic.twitter.com/zID3xZMhyr

So when he won, becoming first driver from an Asian country to win the Indianapolis 500, the lender got an unexpected bang for their buck — especially since they likely paid less than other sponsors did, for much less exposure.

“I’m guessing since it was a last minute thing, that team owner Michael Andretti probably gave Ruoff a lowball figure of only $750,000 to $1 million to be the major sponsor of the Sato car,” automotive journalist Mark Smyth told CBC News in an email.

Sponsors of other top drivers likely paid $2 million and up for pole position on the cars of some of the circuit’s top drivers “and when you win the Indy 500, it’s always a great deal, so whatever they paid is a bargain,” Smyth said.

Sports marketing instructor Vijay Setlur, at the Schulich School of Business at York University in Toronto, says the value of the IndyCar series is not what it once was, but the Indianapolis 500 race is still the jewel in the crown from a marketing perspective.

“There’s no doubt it’s the marquee event,” Setlur said in an interview. “There’s definitely a value there.”

While the Indy 500 is a major event in the U.S., the IndyCar series is trying to expand internationally, so having a non-U.S. driver win on its biggest stage is good for the driver, and good for the series.

Indiana-based Ruoff likely doesn’t have any use for a sudden surge in exposure in Japan, but other sponsors may well be interested if he can keep it up.

“That’s a market that a lot of leagues are trying to tap into,” Setlur said.

Ruoff is led by CEO Mark Music, who appears to have been at the race on Sunday, tweeting his congratulations to his new-found partner.

Ruoff did not reply to a request for comment on Monday, which was Veterans Day in the United States and thus a statutory holiday.