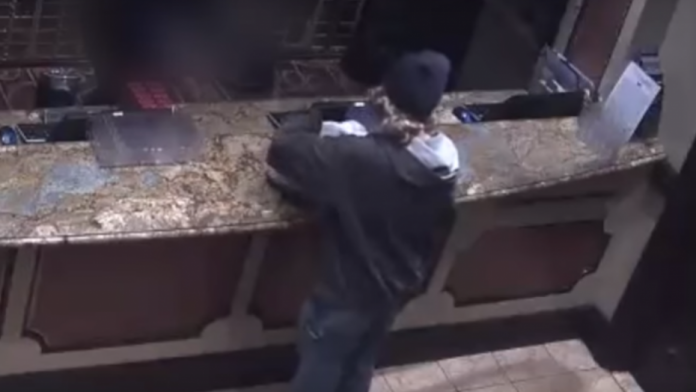 The LVMPD released surveillance video showing the suspect and robbery at the Bellagio Hotel & Casino in Las Vegas on Tuesday.

The incident occurred around 4 p.m. local time when an individual approached a poker cage and demanded an unspecified amount of money.

The video starts by showing the suspect’s car, a silver Chevrolet Cruze with a Nevada license plate, pulling through the hotel drive way.

It then cuts to the suspect walking through the casino door, donning a hooded jacket or sweatshirt, a winter hat over a wig and a mask covering half of his face. He’s also holding a white bag, which will eventually be used to hold the money.

He continues walking and can eventually be seen on the casino floor before making it to the poker cage.

The video shows him approach the area where the attendant is standing. He leans over the counter with the bag visible in his left hand while his right hand is unseen.

After pausing for a moment, a person standing to his left moves a tray of casino chips away from him. The video then cuts to an aerial shot showing the suspect engaging with someone behind the counter who appears to be handing him money, which he stuffs in the bag before leaving.

The suspect is then seen running through the building and escaping through the same doors he originally entered. He continues to run through the drive way before making it to his car and driving off the property.

Police investigating the incident told the Las Vegas Sun that they feel “comfortable and confident” that they’ll find the suspect.

“Those who commit crimes like this on the Strip will be hunted down and whatever amount of cash he got is not enough to face a lifetime in prison,” Las Vegas Metropolitan Police Captain John Pelletier told the outlet.

Pelletier also said someone else may have been brought into the casino with the suspect, but didn’t play a role in the robbery and is cooperating with authorities.