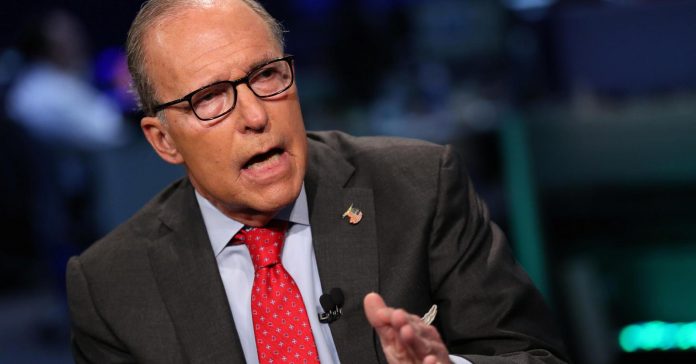 On Tuesday, the president said he would welcome disagreement from Kudlow if he chose him for the post.

“We don’t agree on everything, but in this case I think that’s good,” Trump said. “I want to have different opinions. We agree on most. He now has come around to believing in tariffs as a negotiating point.”

Kudlow told CNBC he got a call from Trump on Tuesday night as he got into an Uber after dinner. He had a conversation with the president in the car, and the driver “had never seen anything like this,” Kudlow said.

By bringing in Kudlow, Trump adds an advisor who supports his pushes for lower taxes and fewer regulations. But he may find an occasional critic of his trade policies.

The National Economic Council director advises the president on economic issues and works to implement policy goals. Cohn helped to shepherd the Republican tax overhaul, Trump’s signature achievement in office so far, through its passage in December. Kudlow also supported the tax bill.

Trump won the presidency partly on his promises to shred or renegotiate U.S. trade deals and crack down on trade practices he deems unfair. He argued that the North American Free Trade Agreement, in particular, sapped manufacturing jobs from the United States.

On Wednesday, Kudlow told the Associated Press he opposed Trump’s tariffs but is “in accord with his policies.”

Kudlow was a budget aide during the Reagan administration. He informally advised Trump on taxes and other economic issues during his 2016 run for president.

Talking to CNBC on Wednesday, he highlighted his “strong relationships” with lawmakers in Congress. Kudlow said House Speaker Paul Ryan called him in recent days and “is very, very enthusiastic” about him taking the job.

“I’m looking forward to serving the president,” he said. “The way I was brought up in the Reagan years, you talk it out and you argue it out, but once the president has made a decision, that’s it. My job is to execute. You don’t go through these endless bureaucratic things and delays. The National Economic Council is in some ways an information broker and i look forward to that role.”