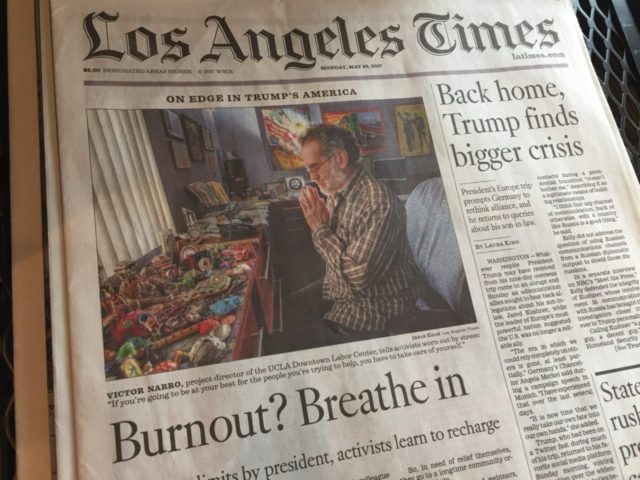 The Los Angeles Times devoted precious space on its front page on Memorial Day to a story about how anxious anti-Trump activists are finding ways to relax.

The Times reports an antidote of sorts in the works:

Many activists in Los Angeles have been in the trenches for years, fighting for immigrant rights and social justice. They know strategy. They know crisis.

But five months into the Trump presidency, they’ve never had their endurance so tested.

So, in need of relief themselves, they go to a longtime community organizer for help.

In his workshops and webinars, Victor Narro tells them to unplug, garden, hike, dance, volunteer, build altars at their cubicles and look at photos that bring them joy. They’re in it for the long haul, after all. President Trump still has nearly 200 more weeks in office.

He teaches them how to slow down and breathe deeply. He gets them to stretch, to close their eyes and meditate.

He also tells them to be vigilant.

“He wants to make you angry. He wants you to lose focus,” he says of Trump. “But we’re not going to let that happen.”

Another remedy — namely, accepting the results of a democratic election, and working together with the new administration on issues of common interest — has apparently never been considered.

Joel B. Pollak is Senior Editor-at-Large at Breitbart News. He was named one of the “most influential” people in news media in 2016. He is the co-author of How Trump Won: The Inside Story of a Revolution, is available from Regnery. Follow him on Twitter at @joelpollak.