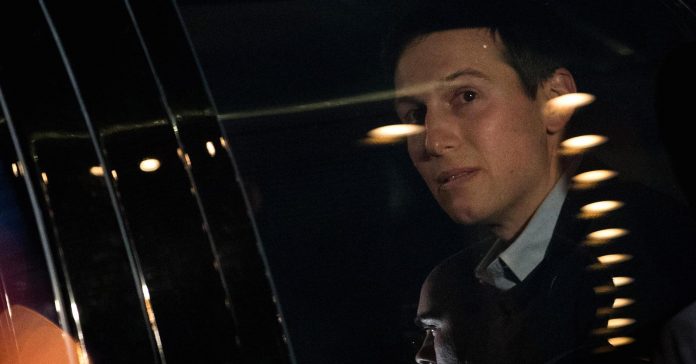 Back on his home turf after an eight-day foreign trip, President Donald Trump is once again facing down controversy — and now it’s hitting close to home.

Trump was greeted on U.S. soil by new reports involving his son-in-law-turned-senior White House adviser, Jared Kushner. NBC News reported Thursday that Kushner has come under FBI scrutiny in the Russia investigation, with multiple officials telling NBC News that investigators believe Kushner has significant information relevant to their inquiry. That doesn’t mean, however, that they suspect him of a crime or intend to charge him.

A source familiar with the thinking inside the White House told NBC News that a few individuals have even suggested to Kushner that he should “lay low,” in the aftermath of those reports and new revelations that he sought to set up a secret back-channel with Russia. Separately, a White House official, who spoke on condition of anonymity, told NBC News that at least one staffer was speechless when they learned about reports of a purported Russia back channel.

Despite that request, there is no indication that the president shares that view and Kushner remains one of his top advisers. “Jared is doing a great job for the country,” the president told The New York Times Sunday. “I have total confidence in him. He is respected by virtually everyone and is working on programs that will save our country billions of dollars. In addition to that, and perhaps more importantly, he is a very good person.”

The Washington Post reported Friday that Kushner discussed setting up a secure and secret communication channel between the Kremlin and the Trump transition with Russian Ambassador Sergey Kislyak. The proposal, which hasn’t been independently confirmed by NBC News, was made during a meeting in December with Kisylak, also attended by former Trump National Security Adviser Michael Flynn, The Post reported.

That Kushner is being cautioned to keep a low profile is notable considering his role leading a new White House “war room” to deal with Russia-related issues. White House aides told NBC News before the weekend that Kushner, presidential counselor Steve Bannon and White House Chief of Staff Reince Priebus would head up the effort, but other officials sounded more skeptical Sunday that Kushner would play a leading and hands-on role.

Despite mounting questions, Kushner remains focused on work and eager to cooperate with the investigation, a source familiar with his thinking told NBC News. And Sen. Bob Corker, R-Tennessee, delivered a similar reminder Sunday, telling NBC News’ Chuck Todd that it “sounds like he’s more than glad to talk about all of these things.”

Kushner would speak for himself, Corker said he’d been reassured, “when the time is right.”

Although the White House largely believed Trump’s first foreign trip to be a success, that doesn’t mean thoughts about shaking things up in the president’s inner circle have subsided. Multiple sources told NBC News that changes are still coming in a White House that has become known for its palace intrigue and publicly aired internal politics.

And former campaign aides Corey Lewandowski and David Bossie are back in the president’s orbit, sources confirmed to NBC News, with their prospects of officially joining the administration swirling as Trump seeks out the team that brought him success during the campaign.

That campaign spirit could be back in full view in the coming weeks, as well, with one official telling NBC News that Trump is expected to get back on the road and to the rallies he so loves, using them to bolster his agenda on key issues like tax reform and health care.