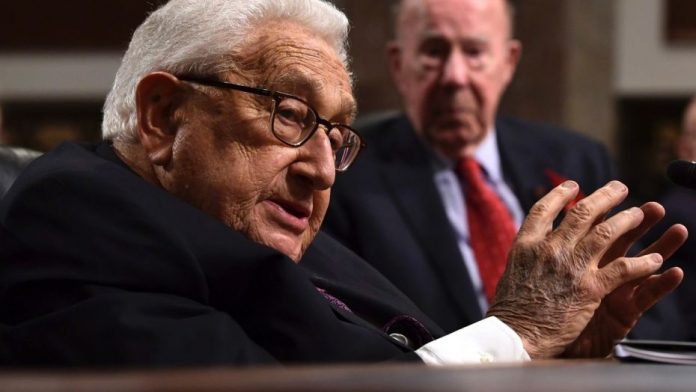 “If North Korea still possesses a military nuclear capability in some finite time, the impact on the proliferation of nuclear weapons might be fundamental,” Kissinger told the Senate Armed Services Committee on Capitol Hill.

“If North Korea still possesses a military nuclear capability in some finite time, the impact on the proliferation of nuclear weapons might be fundamental.”

“Because if North Korea could keep its capability in the face of opposition by China and the United States, and the disapproval of the rest of the … world, other countries will also feel this is the way for achieving international prominence and the upper hand,” he added, according to DefenseNews.

Kissinger, 94 — who served in the administrations of former presidents Richard Nixon and Gerald Ford — called North Korea’s nuclear ambitions “the most immediate challenge to international peace and security.”

He said that denuclearizing the Hermit Kingdom “must be a fundamental objective” as it could signal opportunity for other countries to pursue weapons of mass destruction and set the stage for a “new world … that will require new thinking.”

Although Kissinger argued that a preemptive strike against Pyongyang would be “rational,” he cautioned against engaging in war, and pushed for China to impose sanctions in an effort to force Kim Jong Un’s regime to relinquish its nuclear missiles.

However, Kissinger noted the U.S. will be soon forced to make tough decisions that will require “some prayerful thinking.”

Also testifying Thursday were former U.S. Secretary of State George Shultz, 97, and former Deputy Secretary of State Richard Armitage, 72. Both stressed the importance of equipping the U.S. military with the latest technology, Stars and Stripes reported.

“I am pretty impressed with what they laid out,” Shultz said, referring to the new National Defense Strategy that Defense Secretary Jim Mattis described last week.

“But it doesn’t adequately address the fact of the huge change taking place in de-globalization and a new kind of weaponry that’s coming about,” Shultz added. “Those things need to be factored in.”

Armitage echoed a similar sentiment, pressing military leadership to re-evaluate deployments to ensure they’re necessary, and warned that “we are losing our training edge, our qualitative edge, the equipment is being run into the ground.”

As the saying goes, history has a way of repeating itself – and Kissinger believes the “traditional patterns of great power rivalry are returning,” but this time during an era of technological advancements that “creates new potential for truly catastrophic confrontations between nations.”

U.S. Sen. John McCain, R-Ariz., chairman of the Senate Armed Services Committee, has invited Kissinger to testify in the past to share his knowledge. However, with McCain absent from Thursday’s proceedings as he battles brain cancer, Kissinger elected to begin with a story about the former POW, the Washington Examiner reported.

Kissinger recounted how he was in Vietnam at the same time McCain was released from the North in 1973, and refused a suggestion that he take the war hero back to the U.S. on his plane.

“I refused on the grounds that nobody should get special treatment,” Kissinger said.

When the two reconvened back in Washington, Kissinger said McCain told him, “Thank you for saving my honor.”