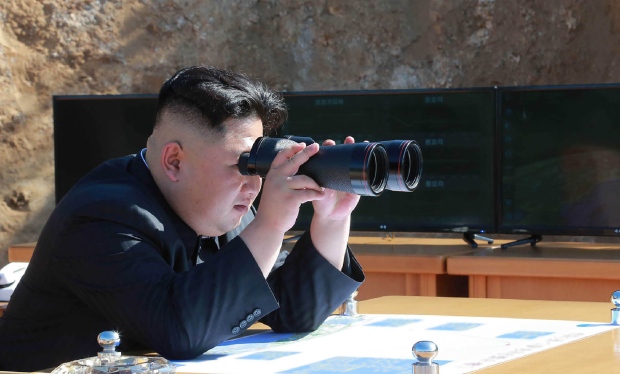 Most of the world would prefer rogue states not have nuclear weapons, so no reasonable person would object to the U.S. trying to talk Kim Jong-un out of his.

But is the Trump administration up to that challenge? Probably not.

For months it’s been reported that the State Department is suffering from neglect and that many important positions have been left vacant, with more vacancies opening all the time.

The most senior U.S. diplomat for North Korea announced his resignation last month. There is no U.S. ambassador for South Korea.

In this photo taken and released on July 4, 2017, by North Korea’s official Korean Central News Agency (KCNA), leader Kim Jong-un is said to be inspecting the test-fire of intercontinental ballistic missile Hwasong-14 at an undisclosed location. (KCNA/AFP/Getty Images)

The administration seems to lack even a clear sense of what, exactly, is up for negotiation. On Friday, White House spokesperson Sarah Huckabee Sanders said during her briefing that North Korea has “promised to denuclearize,” which can’t possibly be true in any sense that both the U.S. and North Korea would agree they understand.

It preposterously suggests that North Korea has laid down its hand without seeing any U.S. cards, that it has no quid pro quos and that there is, in fact, nothing to negotiate.

Kim did reportedly tell the South Korean envoys this week that he would have no need of nuclear weapons if his own country’s security were guaranteed. But that implies that he might be open to negotiating reductions in his weapons in exchange for reductions in U.S. troops and military bases in South Korea. That’s a big ask.

These are the kinds of things that are normally worked out in advance so that both leaders know what to expect when they meet and, as a consequence, can estimate the prospects for success and calibrate public expectations.

1st U.S. president to meet with a North Korean leader

It’s now clearer than ever that the Donald Trump strategy for dealing with North Korea’s Kim is a work in progress — or, less politely, something the president makes up as he goes along.

Take, for instance, the way he handled the invitation to meet Kim when it was made to him through a South Korean envoy Thursday evening. 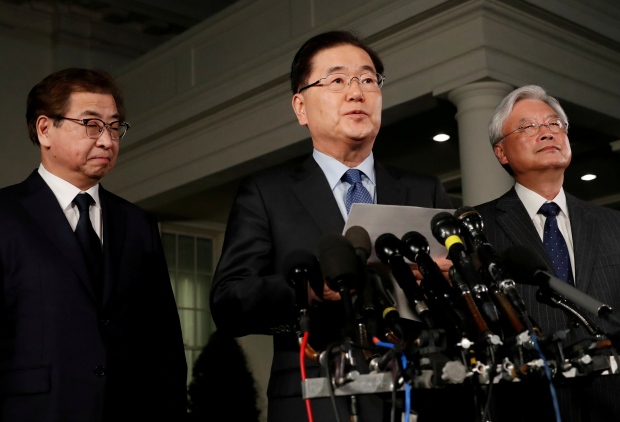 Apparently the president leapt at the offer. The secretary of state was not consulted; there was no period of reflection to consider making a counteroffer or suggest that someone besides the president of the country meet with Kim first.

Instead, the commander-in-chief immediately directed a foreign envoy to make the historic announcement — from the White House driveway, of all places — that space would be made in the president’s calendar for a Trump-Kim summit by May.

Similar invitations have been made to other U.S. presidents, but Trump is the first to accept.

We have learned enough about him by now to know that he is keenly interested in being the first to do things, be they big or small. This is big.

The reason no previous president has met with a North Korean leader up to this point is that none has wanted to give that cachet to the ruler of one of the world’s most notorious thug-ocracies.

So Kim gets some credit for having smoothly scored the first points in this diplomatic opening. Where exactly he and Trump will meet isn’t clear, but the symbolism is: the president of the United States is coming to Kim at Kim’s invitation.

Leaders all patting themselves on the back

In Washington, Republicans and Democrats have competing stories for why this is happening now. Trump and the Republicans claim it was their “maximum pressure” of combining the force of sanctions with the threat of military action, while the Democrats agree the sanctions push was the key but that it began in 2015, when Barack Obama was in the White House.

In Pyongyang, Kim himself will boast that, by sticking to his nuclear program, he forced the world’s powers to take him seriously. Analysts have argued for more than a year that the most likely future is one where the world learns to live with a nuclear North Korea. In this undated photo released by KCNA in March 2016, Kim is said to be looking at a rocket warhead tip. (KCNA/Reuters)

To this point, Trump’s unpredictable and sometimes wild sabre-rattling about North Korea has been judged by some game theorists as only his version of the standard deterrence rhetoric that every president since Harry Truman has used. In that way, he has not made nuclear war more likely, but he has made North Korean denuclearization less likely.

That leads to the same bottom line many analysts have argued for more than a year: the most likely future is one where the world learns to live with a nuclear North Korea.

Trump has said that’s unacceptable, that he knows better than anyone how to negotiate deals to prevent rogue states from going nuclear, that he would never have agreed to the Iran deal that Obama made, for instance.

So the good news, then, is that he will now have his chance to prove that.