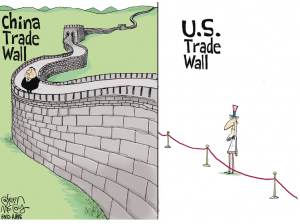 The leader of North Korea, Kim Jong Un, appears to have blinked in the face of pressure President Donald Trump has put on him. It’s reported the U.S. military was in the process of planning a possible preemptive strike on the North Korean regime.  “Un” has invited President Trump to talk about nuclear disarmament in May, and Trump has accepted.Meanwhile, President Trump has paid off on the promise of tariffs on steel and aluminum. China and many other countries are upset and are threating to counter.  Some say Trump is starting a trade war, but the fact is we have been in one for years.  That’s why the U.S. runs a half trillion dollar trade deficit with China alone every year.

I keep asking Democrats to give one idea that is not socialist, communist or Marxist that will help average everyday Americans improve their lives. The Dems don’t have one, but they are willing to do plenty for illegal aliens, and their New World Order overlords like George Soros.  This is why I think the Democrat Party will have to cheat like never before in the 2018 midterms.  Election fraud and voter fraud here we come.

Former CIA Agent and whistleblower Kevin Shipp will come on to update what’s going on between the Trump Administration, the globalists and the deep state.