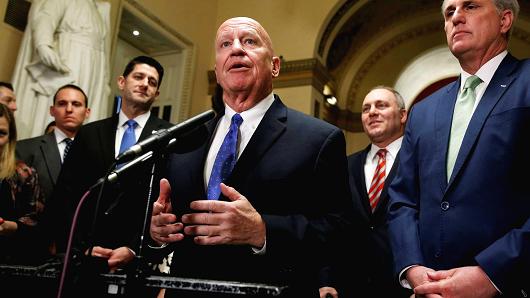 The GOP would at least partly aim to use the new tax proposal as a tool to boost their fortunes in November’s crucial midterm elections. The GOP already planned to use December’s law as a key selling point for November. The tax law appeared not to resonate well in one race so far: Tuesday’s special House election in Pennsylvania.

Trump talked up a possible second phase on Wednesday, without specifying what policy steps he wanted to take.

Larry Kudlow, the longtime CNBC commentator who accepted the role of Trump’s top economic advisor, also told CNBC “there may be more action” on taxes.

Democrats have repeatedly criticized the law as a giveaway to corporations and wealthy individuals at the expense of the middle class. They have partly cited the decision to make corporate cuts permanent in those arguments.

Earlier this month, Democrats released their own tax proposal. The party said it wanted to reinstate a top income tax rate of 39.6 percent and raise the corporate tax rate to 25 percent.