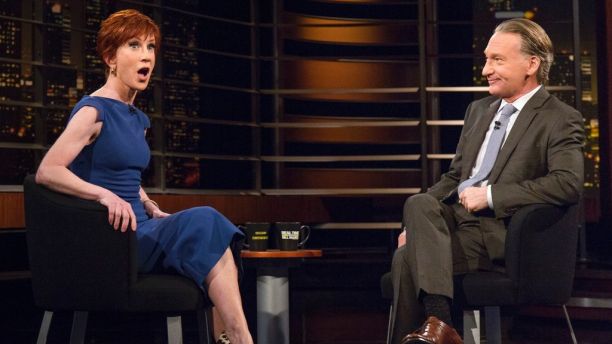 Comedian Kathy Griffin says she’s embarking on a comeback tour, some nine months after provoking outrage — and losing much of her work — by posing with a fake severed head of President Donald Trump.

“Trump’s backyard,” she called it.

“I’m dipping my toes into touring again,” Griffin said, asserting that the president and his supporters would likely prefer she never worked again.

Griffin appeared Friday on HBO’s “Real Time With Bill Maher.” Maher was among a short list of celebrities who supported Griffin after the outrage over her photo with the fake severed head of President Trump.

Griffin’s appearance on Maher’s show appeared to mark the beginning of her comeback attempt, after the backlash over the offending photo last May badly hurt her ability to work.

“TMZ was reporting my show cancellations in real time.”

Griffin thanked Maher for being one of the few celebrities who publicly supported her during the ordeal. Introducing Griffin, Maher told the audience that “she is a good American who loves her country and should be able to work in it.”

Griffin initially apologized for the photo but later retracted the apology because, according to her, the reaction had gotten so out of hand.

Referring to the desire of some Trump supporters to “decimate” her, she raised her arms defiantly and exclaimed, “I’m not decimated!”

Griffin was scheduled to appear on Jimmy Kimmel’s program as well this week, but canceled due to scheduling conflicts.

In preparation for both appearances, Griffin offered a job to Suzie Hardy, Ryan Seacrest’s former personal stylist who accused him of sexual misconduct.

“Hey Suzie Hardy, I will do for you that which no one did for me after May 30,” Griffin tweeted Sunday. “After you were brave enough to speak out I’m happy to offer you a job as my stylist to dress me this week for Jimmy Kimmel and Real Time & I’ll PAY you. What ya think? KG”