It was 1998. Rep. John Conyers was driving on a Michigan highway, when he allegedly put his hands on a female staffer in the passenger seat. She says she was only “saved” from the unwanted contact when police pulled him over for driving “erratically.”

The account emerged early Tuesday in an interview the now-ex staffer gave to the Detroit News, covering claims the Michigan Democrat made unwanted sexual advances toward her and touched her inappropriately twice in the late 1990s.

The report amounts to just the latest example in a long history of controversy for Conyers dating back decades.

Some of that history was well-known — but some is only emerging now, following a bombshell article last week on sexual misconduct allegations. Together, they are raising serious questions about the political future of the longest-serving sitting House member — who is relinquishing his judiciary committee post amid the allegations, but not resigning.

“I deny these allegations, many of which were raised by documents reportedly paid for by a partisan alt-right blogger. I very much look forward to vindicating myself and my family before the House Committee on Ethics,” Conyers said in a statement Sunday, adding he will step down as ranking member.

The Ethics Committee is probing the sexual harassment claims that emerged last week in a BuzzFeed article.

But Conyers has gone before the committee before — in 2006, after three former aides said Conyers used them to babysit and run personal errands while they were supposed to be working in his Michigan offices.

The Ethics Committee ultimately closed the investigation after Conyers agreed to clarify work rules with his staff to ensure they were compliant with ethics rules and regulations.

But that committee process has come under fire.

“It’s often just a black hole where allegations go to die and we never hear about them again,” Melanie Sloan said on Fox News’ “Outnumbered Overtime” on Monday. Sloan is one of the women who has come forward in the last week to accuse Conyers of inappropriate behavior.

“I definitely think there needs to be a process by which members of Congress are held accountable for their conduct, though,” Sloan said, questioning the committee’s general effectiveness.

Sloan, the first Conyers accuser to speak on the record, said the congressman routinely “berated” her.

She said that on one occasion, Conyers summoned her to his office where she found him “walking around in his underwear.” 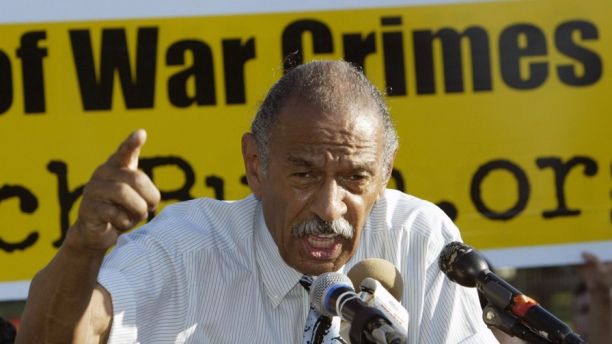 Conyers, who is 88 years old, has reportedly appeared disoriented. According to a New York Times report, Conyers has showed up, on at least two separate occasions, for meetings wearing pajamas, though a Conyers spokesperson said she had “no knowledge this ever occurred.”

Aside from his own alleged misbehavior, his wife, former Detroit City Councilwoman Monica Conyers, served three years in prison in connection with a criminal bribery case.

The new allegations are effectively opening the books on Conyers’ past.

The report said that a female former staffer claimed she was dismissed because she did not “succumb to [his] sexual advances,” and reportedly believed she had no other option than to remain quiet and take a $27,000 settlement from Conyers’ office.

Conyers initially told the Associated Press last week that he hadn’t settled any such harassment complaints, but then issued a detailed clarification acknowledging the complaint was real, though the lawmaker disputed the underlying claims.

“In this case, I expressly and vehemently denied the allegations made against me and continue to do so,” Conyers said last week, adding that his office resolved the allegations. “That should not be lost in the narrative. The resolution was not for millions of dollars, but rather for an amount that equated to a reasonable severance payment.”

Other women later came forward. One woman reported that she received unwelcomed touching “repeatedly and daily” between 2015 and 2016, including “rubbing on her shoulders, kissing her forehead, covering and attempting to hold her hand,” as well as invitations to his home, the woman said in her court documents.

The latest accusation came early Tuesday from the woman in the car, Deanna Maher, now 77 years old, who ran a Michigan office for Conyers from 1997 to 2005.

Maher claimed that there were three instances of inappropriate conduct. The first was allegedly in 1997, when she reportedly rejected his offer to share a hotel room and have sex.

“I didn’t have a room and he had me put in his hotel suite,” Maher told the newspaper, adding that she rejected his offer to share his room at the Grand Hyatt in Washington and have sex after an event with the Congressional Black Caucus in 1997.

“He was trying to feel me up with his right hand,” Maher told the Detroit News of the car incident. “I kept pushing his hand away. Then he put his hand on my neck and started trying to tickle me. We were on I-75, and he was driving erratically. I was saved by the bell because we got pulled over by the police for the way he was driving.”

Conyers’ attorney, Arnold Reed, told the Detroit News that he questioned why Maher would wait so many years to come out with the alleged accusations.

“At best, they are uncorroborated. At worst, they’re just not believable,” Reed told the newspaper. “When you consider that they’re flying down I-75, he is driving and has time to do all of that, they get pulled over by a police officer, and she doesn’t tell him what’s going on?”

Despite the accounts and surfacing of new allegations, Conyers issued a statement last week, noting that it was “important to recognize that the mere making of an allegation does not mean it is true.”

Some former Conyers staffers have come to his defense, saying they believe in “due process” and support allowing the ethics probe to “run its course.”

“While we do not pass judgment on the specific allegations reported in the press or the women who brought them, our experiences with Mr. Conyers were quite different than the image of him being portrayed in the media,” 12 former staffers wrote in a joint statement. “Mr. Conyers was a gentleman and never behaved in a sexually inappropriate manner in our presence. He was respectful, valued our opinions, challenged our thinking, and treated us as professionals.”