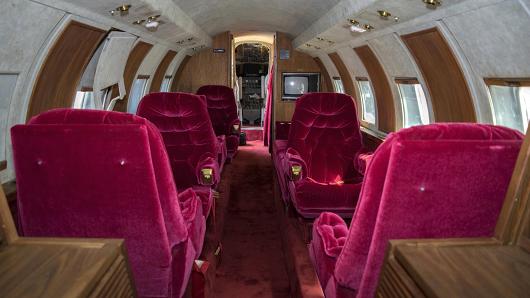 This undated file photo provided by GWS Auctions, Inc. shows the interior of a private jet once owned by Elvis Presley on a runway in New Mexico. The plane has been auctioned after sitting on a runway in New Mexico for 35 years. The plane sold for $430,000 on Saturday, May 27, 2017, at an Agoura Hills, Calif., event featuring celebrity memorabilia, GWS Auctions Inc. said.

The jet was owned by Elvis and his father, Vernon Presley, Liveauctioneers.com says.

It has been privately owned for 35 years and sitting on a tarmac in Roswell, New Mexico.

Photos of the plane show the exterior in need of restoration and seats of the cockpit torn.

Roy McKay told KOB-TV in Albuquerque he designed the interior himself. McKay said that when he purchased the jet, it had a two-toned gray interior and “kind of looked like a casket.”

Federal Aviation Administration records show no interior changes were ever made to the jet, Carter said.