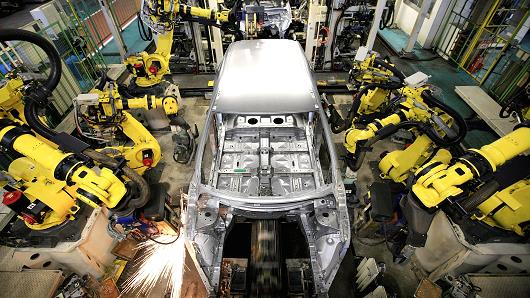 Robot assembler work on cars during the assembly process at Nissan Motor Company’s Kyushu Plant on November 23, 2007 in Kiyakyushu, Japan.

Japan’s industrial output fell 3.3 percent in May from the previous month due to lower production of cars and construction equipment, preliminary government data showed on Friday, in a sign of a temporary lull in manufacturing activity.

The result compared with the median estimate of a 3.2 percent decline in a Reuters poll of economists.

It followed a 4.0 percent increase in April, which was the fastest increase in almost six years, the data from the Ministry of Economy, Trade and Industry showed.

Manufacturers surveyed by the ministry expect output to rise 2.8 percent in June and fall 0.1 percent in July.