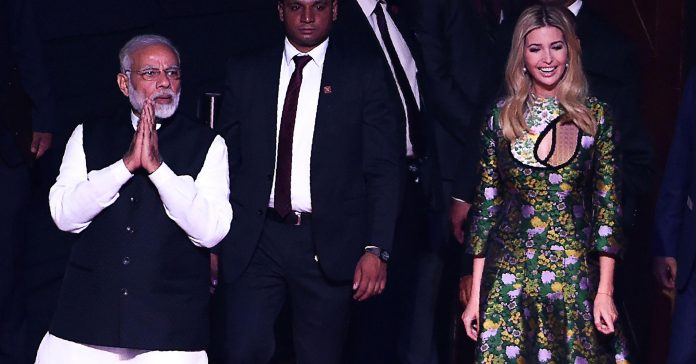 Ivanka Trump is making a significant solo outing by headlining a business conference in India, but her trip highlights questions about whether her message of empowering poor women matches her actions.

Trump landed Tuesday in the southern city of Hyderabad and is scheduled to make the opening address at the Global Entrepreneurship Summit later in the day.

“Thank you for the warm welcome,” Trump tweeted. “I’m excited to be in Hyderabad, India for #GES2017.”

The city has cleared away beggars and filled potholes ahead of the visit by Trump, the daughter of President Donald Trump and a senior presidential adviser.

Indian Prime Minister Narendra Modi will join her at the opening and will later host her for dinner at the luxurious Falaknuma Palace Hotel.

Many in India are excited about Trump appearing at the conference, which is being co-hosted by the United States and India.

Others marveled at the improvements made around Hyderabad. “All new,” said Gopal, a taxi driver who gave only his first name.

But he also pointed to the potholes that remain on many smaller streets. “She’s not coming here, so they didn’t fix it,” he said.

More than 1,200 people are expected to attend the three-day conference, although not everyone is thrilled about Trump’s presence.

“It’s now being called Ivanka Trump’s summit. It totally overshadows all our work,” said Sangeeta Agarawal, the chief executive of U.S. startup Helpsy Health. “We feel that’s it become more about her.”

And the conference’s focus on female entrepreneurs raises questions about some of the commercial decisions made by Trump and her famous namesake brand.

Critics have faulted her for failing to use her leadership role to call out labor and human rights abuses, particularly in China, where the bulk of her U.S. merchandise ships from. And they point out that she has failed to take a public stand on alleged abuses in her brand’s own supply chain.

Trump stepped back from day-to-day management of her brand before taking on an official role as White House adviser, but still retains an ownership interest.