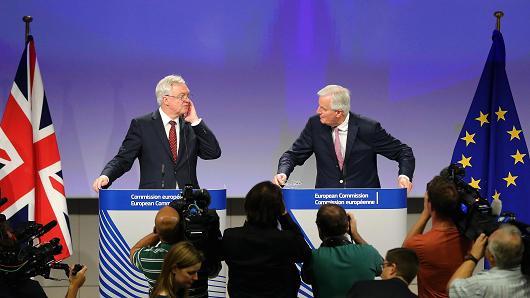 Chief negotiator for the European Union, Michel Barnier (R) and Secretary of State for Exiting the European Union, David Davis (L) hold a joint press conference during the second round of the Brexit negotiations in Brussels, Belgium on July 20, 2017.

U.K. and EU diplomats are locked in the third round of talks this week in Brussels, but real negotiations have yet to begin, the European Parliament chief for Brexit warned in an exclusive interview with CNBC.

“Let’s be honest, I think it’s maybe the first round of negotiations,” Guy Verhofstadt, who represents the European Parliament in the Brexit process, told CNBC Wednesday about the latest series of formal discussions between the two sides that are due to conclude Thursday.

The U.K. and the EU have already held two rounds of talks in June and July. But according to Verhofstadt, those represented — respectively — an official start to talks and the public presentation of both sides’ initial positions.

“I think what we need to do is really to start negotiations and to see how we do this withdrawal; if a transition is needed, making a transition that is not causing economic damage (for either side),” Verhofstadt said, adding that it was only then that both parties should consider their future relationship.

The U.K. had initially pushed for negotiations to focus on its exit and its future relationship with Europe at the same time. But the Europeans have said they want to confirm the technicalities of how the U.K. will leave the bloc, before deciding on the shape of any future cooperation or partnership.

The EU wants to agree first on the U.K.’s financial and budgetary liabilities — the so-called Brexit Bill — as well as finding a mutually agreeable resolution to the issue of the Irish border, and some concrete confirmation of the future rights for EU citizens’ living in the U.K.

At the conclusion of the July round of talks, the division between the two sides was obvious, with the EU’s leading negotiator Michel Barnier demanding the U.K. clarify its position and what it hoped to achieve in the exit discussions.

Since then the U.K. government has published several position papers but Verhofstadt — like many in Brussels — was largely dismissive of their utility, since “most of them were in fact papers concerning the future relationship between U.K. and the European Union.”