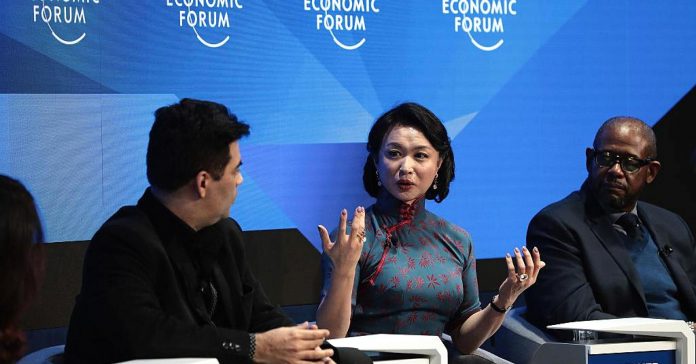 Jin, a former military dancer and choreographer, is also the host of her own talk show and a popular matchmaking series in China.

The media personality, known for her frankness, said that it was “quite egocentric” of the West to be suspicious of China’s rise as Europe and the U.S. have led global development in the past without much of a challenge from the rest of the international community.

“Come on, game over … (We’ve) followed your game for twenty-half centuries. Now follow my rules a little bit,” Jin said.

U.S. President Donald Trump might have his own agenda when it comes to foreign policy, but so did China, she added.

Under the current Trump administration, the U.S. has withdrawn from the Trans-Pacific Partnership and the Paris climate agreement. This has brought an unlikely defender of globalization to the fore — China.

Despite its pledges, the world’s second-largest economy has had an uneven track record in its bid to open up. While it might be promoting free and open trade on the global stage, China has faced criticism over domestic policies that restrict foreign firms from operating in the country.

Reforms initiated by the government have helped pare coal usage while China also has ambitious carbon emissions targets. However, whether these goals are actually met remain to be seen, as parts of country continue to be plagued by air pollution.

“Running a country is just like running a big family,” she said, adding that the Chinese government has done a good job with infrastructure development in the country. While there were “small issues” that still had to be addressed, China was headed in the right direction, Jin said.

“You can see twenty years ago and now, the confidence of the Chinese today on the international stage is completely different.”