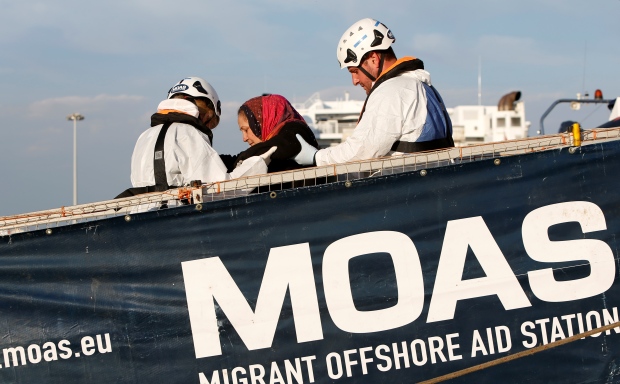 The European Union executive on Thursday threw its weight behind a plea by Italy for fellow EU states to allow rescue boats carrying African migrants across the Mediterranean to dock in their ports to alleviate growing pressure on Rome.

About 10,000 people have been rescued over the past three days, mainly from unsafe smugglers’ dinghies that had set out from Libya. Italy has taken in 82,000 refugees and migrants so far this year, a third more than a year ago.

That makes Italy the main point of entry to Europe, a fact that is increasingly influencing domestic politics. Voters dealt a blow to the ruling party in local elections last week, opting for right-wing groups promising a tougher line on immigration.

“We will support Italy in discussions on regional co-operation on disembarkation,” a migration spokesperson for the European Commission told a briefing, adding the bloc’s migration ministers would tackle the matter next week in Tallinn.

“We understand Italy’s concerns and we support their call for a change in the situation,” she said, adding that the charities running rescue operations would also be informed.

The commission has signalled readiness to give Italy more cash to help with increased arrivals, though officials and diplomats in Brussels were skeptical there would be any swift agreement for other EU states to take in the NGO boats. They said the ports of Barcelona and Marseille were possible options.

Spain’s EU mission said it would only unveil their position on the matter at the ministers’ meeting in the Estonian capital.

The French Foreign Ministry declined to comment. A French diplomatic source said no specific proposal was on the table at this stage, expecting more talks next week.

The United Nations says more than 2,000 people perished while attempting the voyage so far in 2017.

Non-governmental organizations now account for a big part of the rescue missions and have at times been criticized by politicians, including in Italy. They bring more migrants and refugees to European shores, which is the opposite of what the EU is trying to achieve.

The rescue groups say they are acting on humanitarian grounds and are being scapegoated by politicians keen to tap into higher anti-immigration sentiment.

A rescued migrant disembarks from a Migrant Offshore Aid Station ship on the island of Sicily in April. (Darrin Zammit Lupi/Reuters)

Italy has threatened to close its ports to the NGO boats, though few in Brussels believed it would come to that.

“We have not discussed it among ourselves at all so far,” an EU diplomat said. “Seemed like the Italians have just started by detonating this media bomb to lay ground for talks next week.”

Some 1.7 million refugees and migrants have reached EU shores after perilous Mediterranean voyages since 2014.

The influx bolstered euroskeptic, anti-immigrant parties, prodding EU leaders into steps to curb arrivals of people fleeing wars and poverty in the Middle East and Africa.

The EU’s 28 member states are at loggerheads over sharing out those asylum-seekers who make it to Europe, with formerly communist eastern capitals refusing to host any to help frontline states Italy and Greece.

To discourage arrivals, the EU has turned increasingly restrictive in granting asylum and is trying to step up deportations of those judged to have arrived only to improve their standard of living, not to escape persecution or war.

It has also expanded assistance to Libya and other African states in hopes of improving stability and generating enough sustainable economic opportunity there to diminish the attractiveness of a hazardous journey to Europe.

In addition, the EU runs a naval operation in the southern Mediterranean to rein in people smugglers. But all these measures have not reduced the number of crossings so far.

“Politically, the situation is not good for Italy. If the arrival figures keep on rising, Rome will be in trouble,” another EU diplomat said. “But there are no easy solutions. I don’t think others would be happy to accept these vessels.”