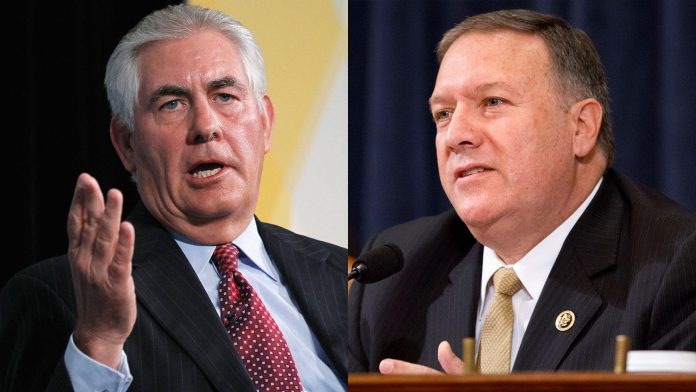 Members of the Senate Foreign Relations Committee say Mike Pompeo’s confirmation hearing for Secretary of State will be in April, but they didn’t specify a specific date.

Pompeo, a passionate ally of Israel, could soon be in charge of US diplomacy as the president takes on high-stakes talks with North Korea.

President Trump cited ongoing disagreements with outgoing Secretary of State Rex Tillerson that led to his decision to make a change.

He pointed specifically to areas including North Korea diplomacy, steel and aluminum tariffs, and the Iran nuclear agreement.

In his last address, Tillerson gave a timeline for his departure by the end of March and addressed State Department accomplishments. He said more work clearly needs to be done, specifically with Russia, China, and Syria.

Tillerson said, “As a State Department, we’re bound together by that oath. We remain steadfast here in Washington and at posts across the world, many of whom are in danger pay situations without their families.”

He added, “The world needs selfless leaders like these.”

The man to replace Tillerson, Mike Pompeo, will face a confirmation process from the same senators who voted to confirm him as CIA director.

Pompeo, a West Point graduate and former congressman, is a fierce critic of the Iran nuclear deal and a strong supporter of Israel.

He is known as a devout Christian, and he’s also a member of the White House Cabinet Bible study.

President Trump is an outspoken fan of Pompeo who personally briefs the commander in chief on US intelligence matters a regular basis.

“We’re always on the same wavelength,” said Trump. “The relationship has always been very good. That’s what I need as secretary of state.”

On Capitol Hill, Sen. Marco Rubio (R-FL) who voted for Tillerson despite objections to his Russia ties, called Pompeo an “excellent choice.”

“I know him very well. He’s uniquely positioned and prepared,” said Rubio. “I think he will be a great Secretary of State, I will be an enthusiastic supporter.”

Sen. Bob Menendez (D-NJ) said, “There is a difference of being a CIA Director, which is about exhibiting covert activities throughout the world and gathering intelligence and the art of diplomacy, and he has to show us he can exhibit those skills.”

Behnam Ben Taleblu of the Foundation for Defense Democracies hopes the administration capitalizes on the timing.

He says the shuffling taking place at Foggy Bottom could be positive for US diplomacy.

Taleblu said, “I think if there is any diplomacy between the US and North Korea it must be on American terms and must share the definition of denuclearization. We can’t have one definition in Washington and one in Pyongyang and Pompeo seems like to me is one person who will stick to that definition.”

The president’s move opens the door for CIA long-timer Gina Haspel to move to the top post there. If confirmed, she would become the first woman to lead the spy agency.

Haspel will likely be questioned by Democrats for her work overseeing questionable interrogations of US detainees in the aftermath of 9/11.

She was in charge of a CIA “black site” prison where detainees faced waterboarding and other measures.