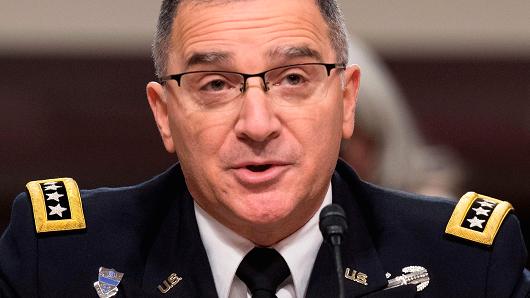 US Army General Curtis Scaparrotti, Commander of the US European Command and NATO Supreme Allied Commander Europe, testifies on Capitol Hill before the US Senate Armed Services Committee in Washington, DC, on March 8, 2018.

Despite repeated warnings that Russia is trying to interfere in the 2018 midterm elections, it is becoming increasingly unclear who is leading the U.S. response to the cyber attacks, or whether America can successfully counteract them.

Speaking to lawmakers on Thursday, the top U.S. general in Europe told lawmakers that the U.S. does not have a satisfactory understanding of Russian cyber infrastructure nor an effective approach to deal with cyber threats.

“I don’t believe there is an effective unification across the interagency, with the energy and the focus that we could attain,” Army Gen. Curtis Scaparrotti, who is also NATO’s Supreme Allied Commander, Europe, told a Senate Armed Services Committee hearing.

The general’s comments came after multiple military and intelligence officials have said that they have yet to receive directives from President Donald Trump to combat the online onslaught from Russia.

Scaparrotti on Thursday also shed some light on how the Russian hackers were targeting the U.S.

“Typically, when you look at their [Russia’s] disinformation, their social media, it is generally targeted at the undermining of Western values, confidence in that government, confidence in their governmental leaders, almost always subtly just hedging away at that,” he said.

“Because of today’s capabilities and information, where they can use multiple platforms and generate great volume, it can really undermine a nation,” added Scaparrotti, who oversees an area of responsibility that includes Russia.

When asked by Sen. Mazie Hirono, D-Hawaii, whether the executive branch had communicated a strategy with him he said, “with respect to our elections that’s not really within my portfolio as the EUCOM commander, that is at CYBERCOM, OSD, and Joint Staff level.”

“There doesn’t seem to be anyone taking the lead on this and that is a cause of concern to many of us,” Hirono said.

Scaparrotti is the latest military official to signal that the Trump administration has yet to give direction on how to respond to Russian cyber interference.