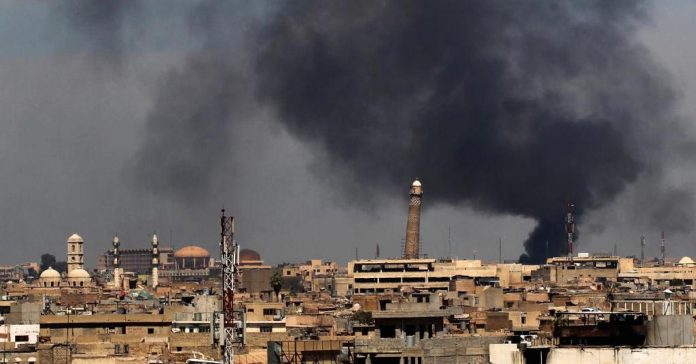 Those residents who have escaped the Old City say many of the civilians trapped behind IS lines — put last week at 50,000 by the Iraqi military — are in a desperate situation with little food, water or medicines.

“Boys and girls who have managed to escape show signs of moderate malnutrition and carry psychosocial scars,” the United Nations Children’s Fund UNICEF said in a statement.

Thousands of children remain at risk in Mosul, it said.

IS leader Abu Bakr al-Baghdadi proclaimed himself ruler of all Muslims from the Grand al-Nuri Mosque’s pulpit on July 4, 2014, after the insurgents overran swathes of Iraq and Syria.

His speech from the mosque was the first time he revealed himself to the world and the footage broadcast then is to this day the only video recording of him as “caliph”.

He has left the fighting in Mosul to local commanders and is believed to be hiding in the border area between Iraq and Syria, according to U.S. and Iraqi military sources.

The mosque was named after Nuruddin al-Zanki, a noble who fought the early Crusaders from a fiefdom that covered territory in modern-day Turkey, Syria and Iraq. It was built in 1172-73, shortly before his death, and housed an Islamic school.

The Old City’s stone buildings date mostly from the medieval period. They include market stalls, a few mosques and churches, and small houses built and rebuilt on top of each other over the ages.

The Iraqi state’s failure to prevent Islamic State from taking over as much as a third of the country in 2014 is fueling arguments in favor of greater self-determination of Christian and other minorities it failed to protect.

A group of Assyrian, Chaldean and Syriac Christians published a document on Thursday after a conference in Brussels calling for the self-governance of Christians in the Nineveh Plains east and north of Mosul, where they have a strong presence.