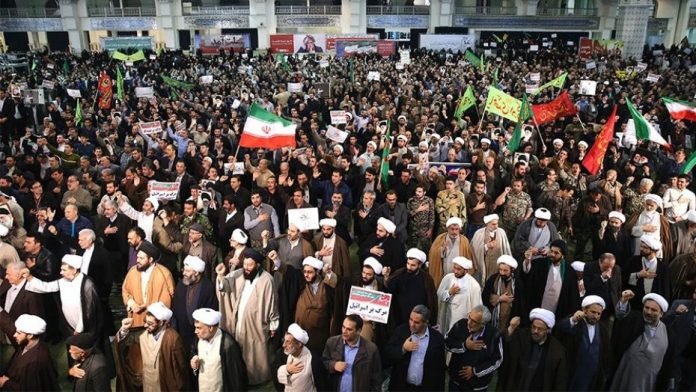 Iran strongly dismissed President Trump’s warning and support amid anti-government protests in the capital city of Tehran and elsewhere in the Arabian Gulf country, calling the US president an “opportunist.”

“Iranian people give no credit to the deceitful and opportunist remarks of U.S. officials or Mr. Trump,” said Iran Foreign Ministry spokesman Bahram Ghasemi, according to a state television report.

The statement comes hours after Trump weighed in on the protests against high unemployment and the rising costs of food.

“Many reports of peaceful protests by Iranian citizens fed up with regime’s corruption & its squandering of the nation’s wealth to fund terrorism abroad. Iranian govt should respect their people’s rights, including right to express themselves. The world is watching! #IranProtests,” Trump tweeted late Friday.

“Iran’s leaders have turned a wealthy country with a rich history and culture into an economically depleted rogue state whose chief exports are violence, bloodshed, and chaos,” the statement said.

The economic protests began midweek in Mashhad, Iran’s second-largest city and a holy site for Shiite pilgrims. They continued through the weekend with hundreds of students and others protesting at Tehran University.

Officials say roughly 50 protesters have so far been arrested.

Trump, since at least the start of his 2016 presidential campaign, has been critical of the Iranian leaders, arguing they have not fully complied with a 2015 international deal in which they agreed to curtail their pursuit of a nuclear weapon in exchange of the lifting of billions in crippling economic sanctions.

The president, as a result, has refused the recertify the deal, brokered by the Obama administration.

The protests, sparked largely by social media, are also taking place amid previously planned pro-government rallies that have drawn a reported 4,000 people.

Ali Ahmadi, a 27-year-old pro-government demonstrator, blames the U.S. for all of Iran’s economic problems.

“They always say that we are supporting Iranian people, but who should pay the costs?” he said.

Social media videos show clashes between protesters and police. The semi-official Fars news agency said protests on Friday also struck Qom, a city that is the world’s foremost center for Shiite Islamic scholarship and home to a major Shiite shrine.

The demonstrations appear to be the largest to strike the Islamic Republic since the Green Movement in 2009 after Mahmoud Ahmadinejad was re-elected as president.

However, information about the most recent protests remains scarce because neither state-run nor semi-official media in Iran have widely reported on them.

Iran’s economy has improved since the nuclear deal. But that improvement has not reached the average Iranian. Official inflation has crept up to 10 percent again.

The price of eggs and poultry has increased by as much as 40 percent, though the government appears to blame the spikes on fears about avian flu contamination.

While police have arrested some protesters, the country’s powerful Revolutionary Guard and its affiliates have not intervened as they have in other unauthorized demonstrations since the 2009 election.

Secretary of State Rex Tillerson told Congress in June that America is working toward “support of those elements inside of Iran that would lead to a peaceful transition of that government” has been used by Iran’s government of a sign of foreign interference in its internal politics.

“The noble Iranian nation never pays heed to the opportunist and hypocritical mottos chanted by the U.S. officials and their interfering allegations on domestic developments in the Islamic Republic of Iran,” the state-run IRNA news agency quoted ministry spokesman Bahram Ghasemi as saying.