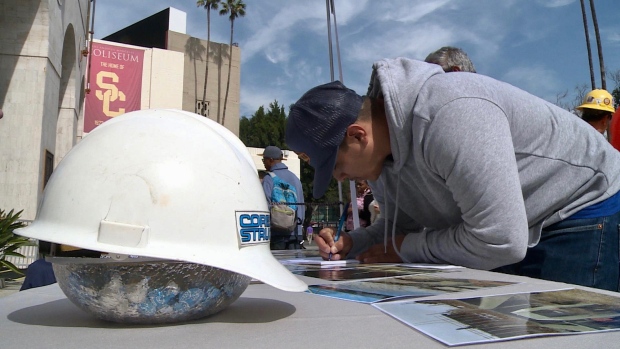 The irony is Eddy Estrada is scared of heights.

“You’re standing on this pole … terrified,” he said. But for $17.34 US an hour, plus benefits, the 32-year-old is willing to swing from scaffolding like a lemur.

Two thousand workers are being hired to renovate L.A. Memorial Coliseum, which is why Estrada was among the hundreds lined up at a recent construction job fair in downtown Los Angeles.

Eddy Estrada gives his details at a construction job fair. He says undocumented people come over for the American dream and end up “being placed up against the wall.” (Kim Brunhuber/CBC)

He said he’s hoping to help build America, and in doing so, build a better life for his family. But these days he’s less worried about falling from a great height than he is falling afoul of federal immigration agents, which he said have been suddenly active in California’s Latino communities.

“You have people coming over here because that’s the American dream to come for a better life, and then they’re being placed up against the wall,” Estrada said. “It affects me personally.”

Many at the construction job fair were undocumented, like Ecuador’s Homero Ayala, who said some employers feel suddenly emboldened to mistreat workers now that the immigration officials are more actively trying to deport illegal immigrants.

“If you make any demands or complaints, they say they will call the police and you’re out of there,” Ayala says in Spanish. “That’s the problem when you don’t have papers.”

Ayala says they’re “caught in the middle of the latest war” between D.C. and California. The casus belli: California’s recently enacted sanctuary laws, which limit the ability of state officials to help the federal government enforce immigration policy.

According to SB 54, if any undocumented person is arrested by police, immigration officials aren’t allowed to tell federal agents when they will be released, nor can they transfer undocumented immigrants directly into federal custody unless they’ve committed a serious crime. AB 450 means employers have to give workers 72 hours’ notice before their workplace is inspected by immigration. And AB 103 gives California the power to review conditions in facilities where immigrants are being detained.

‘They wait at 7-Elevens’

Since the laws were passed last October, U.S. President Donald Trump has repeatedly expressed his displeasure. And, as if in response, raids by U.S. Immigration and Customs Enforcement (ICE) seem to have increased in 2018, says carpenter Eduardo Sauceda, who was manning a stall at the construction job fair. 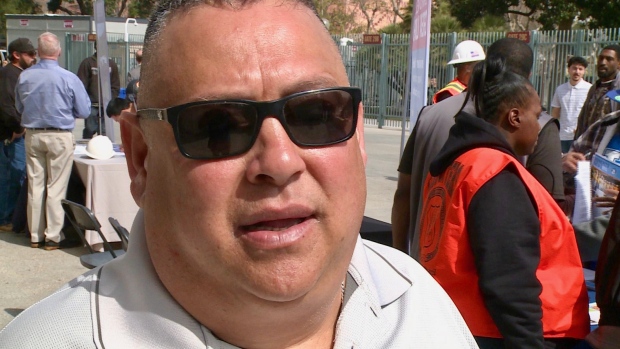 “The ICE agents, they wait at 7-Elevens, they go to the Walmarts and they try to fish in who they can,” Sauceda said.

“I can’t sit by idly while the lawful authorities of federal officers are being blocked by a legislative action of politicians,” Sessions said at a gathering hosted by the California Peace Officers’ Association.

“I don’t think it’s a strong case for the government; I think that it is somewhat of a grudge match between California and the federal administration,” Reisz said. “The argument that this state has to bend to whatever will the federal government wants to impose is not a right founded in the Constitution.” 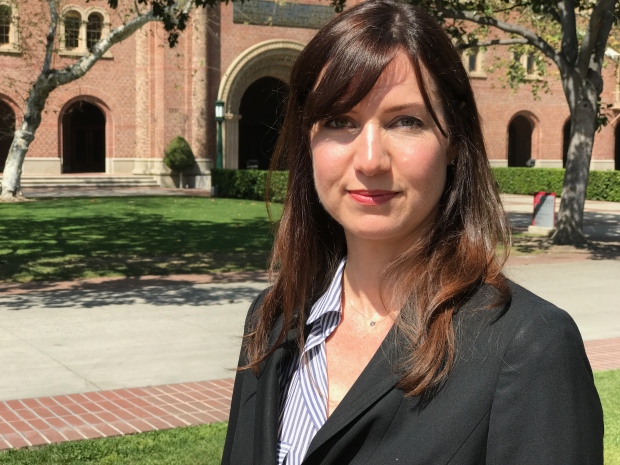 In an act of legal ju-jitsu, Sessions said the government’s suit was based on a partially successful Supreme Court challenge by the Obama administration. In the 2012 case against the so-called “show me your papers” law, the Obama administration alleged Arizona violated federal immigration laws. In striking down three of the four provisions of the Arizona law as unconstitutional, the Supreme Court generally affirmed the concept of federal supremacy in matters of immigration. But Reisz says “there’s no direct parallel with the situation in Arizona.

“In this case California is seeking to not co-operate with federal enforcement when it’s not legally required to, so it’s not really making laws to regulate immigration,” Reisz said. “The real question is are they interfering with the federal government’s ability to enforce immigration. And what I’ve seen from the laws, they aren’t.”

‘They don’t even believe in the flag’

Some see it differently in Whittier, Calif., a city of about 90,000 people 30 kilometres southeast of Los Angeles. At a recent rally to support anti-crime legislation, the crowd spoke with one voice: No sanctuary.

“Sanctuary in what terms?” asked Jerry Warner. “You have to ask yourself what exactly does that mean? Does that mean it’s harbouring and protecting criminals over the citizens? They don’t even believe in the flag. So you tell me what, you know, what kind of people we want here.” 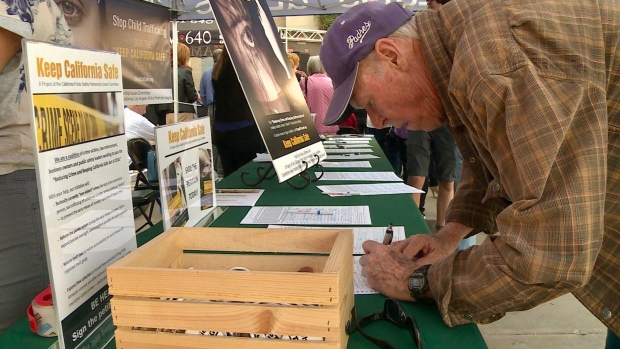 At this public event in Whittier, Calif., to “Keep California Safe,” many applaud the Trump administration for “doing what the American people want” by challenging California’s so-called sanctuary laws. (Kim Brunhuber/CBC)

“We’re going to take the State of California back again and make it a great state the way it used to be,” said Denis Gregorian.

Sessions’ lawsuit against California is also getting support from many in the law enforcement community.

‘Taboo to even do your job’

Ron Hernandez, president of the Association for Los Angeles Deputy Sheriffs, says California’s so-called sanctuary laws mean most criminals who are in the country illegally get released back onto the streets.

“When something goes too far to one end, then I would I would support anybody pushing hard from the other end,” Hernandez said. “From a law enforcement perspective, it’s become taboo to even do your job.” 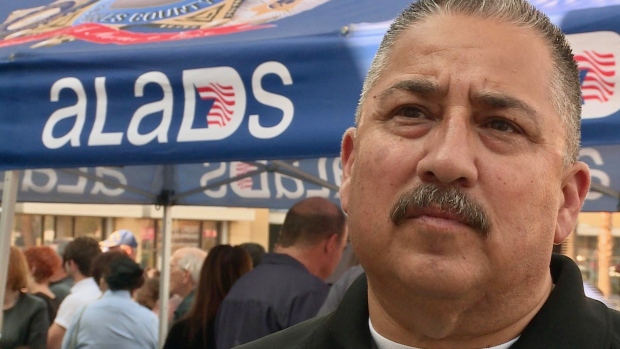 Ron Hernandez, president of the Association for Los Angeles Deputy Sheriffs, says California’s sanctuary laws are making it “taboo to even do your job.” (Kim Brunhuber/CBC)

Do their job: that’s all that many of the applicants at the construction job fair in downtown L.A. say they want.