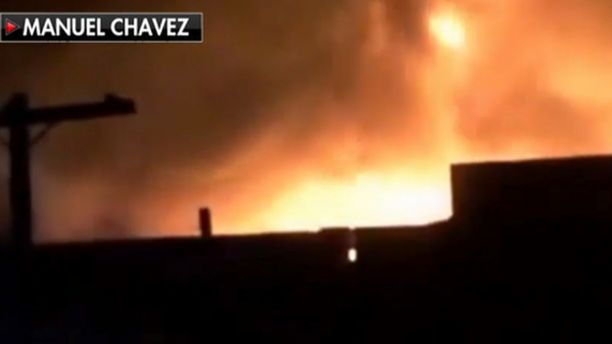 An illegal immigrant charged in a deadly crash avoided being detained by immigration agents and bonded out of a Colorado jail Saturday when local officials waited an hour to notify the agency.

Ivan Zamarripa-Castaneda, 26, fled the scene of an accident on Interstate 70 involving a tractor-trailer that caught on fire last week, leaving the driver to die, according to the Denver Police Department. He was arrested by local officials March 4, and was wanted by U.S. Immigration and Customs Enforcement.

“Based on an immigration detainer lodged on March 5, on March 10, 2018, the Denver County Sheriff’s Office notified the Denver Office of U.S. Immigration and Customs Enforcement (ICE) that it would be releasing on bond Ivan Gerardo Zamarripa-Castaneda, 26, from Mexico, at an unspecified time,” ICE Denver Field Office Director Jeffrey D. Lynch said in a statement to FOX31. “Less than two hours afterwards, ICE deportation officers arrived at the sheriff’s office to have Zamarripa-Castaneda transferred to ICE custody, only to be told that he had already been released.”

Lynch, who called Zamarripa-Castaneda an “immigration fugitive,” said the agency is working with the DCSO to figure out what went wrong in the communications process.

Flames from a crash on Interstate 70, where police say Ivan Zamarripa-Castaneda caused an accident and then fled from the scene

The Denver County Sheriff’s Office said in a statement the 26-year-old posted a $25,000 bond on Saturday and was released from Denver’s Downtown Detention Center at 5:28 p.m.

The law enforcement agency said although the department alerted ICE in response to a request for release notification it received, that alert did not occur until 6:33 p.m.

“This is unacceptable and the Sheriff has ordered an immediate internal review to determine why established notification processes did not take place before Zamarripa-Castaneda was released,” the sheriff’s office said.

The 26-year-old was able to bond out and avoid immigration officials — at least until his next court date — because the Denver Police Department and other state agencies stopped honoring detainer orders from ICE in 2013 after courts ruled they were illegal.

The Denver Sheriff’s Department, which operates the jail, told Fox News last week that, unless ICE received a federal criminal warrant, Zamarripa-Castaneda would be able to leave detention after posting bond.

“The Denver Sheriff Department will not honor civil detainers as it is considered unconstitutional,” the agency said.

ICE officials told Fox News last week they detain up to 40,000 people per day, and don’t have the resources to go after every federal warrant.

“By placing retainers on these individuals, we actually help improve public safety by taking these criminal aliens off the streets and ultimately removing them to their country of origin,” ICE Director of Communications Carl Rusnok told Fox News.

The deadly crash involving Zamarripa-Castaneda happened just before midnight on March 3 on Interstate 70. The wreck killed a 57-year-old tractor trailer driver who has yet to be identified by officials.

The 26-year-old Zamarripa-Castaneda then fled the scene before he was arrested at his home March 4, prosecutors said. Zamarripa-Castaneda’s speech was slurred and his breath had a moderate odor of unknown alcohol, according to a probable cause affidavit obtained by FOX31.

After being charged with one count of vehicular homicide-DUI and one count of leaving the scene of an accident resulting in death, Zamarripa-Castaneda appeared in court Friday before bonding out of jail. He’s set to be in court April 2 when a preliminary hearing has been scheduled, according to FOX31.

Fox News’ Alicia Acuna in Denver contributed to this report.