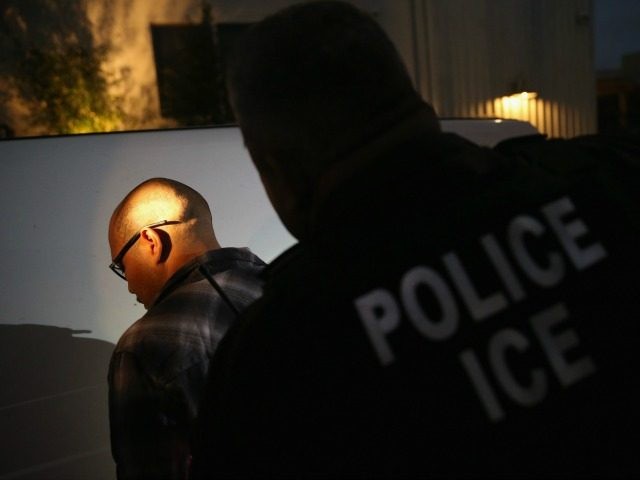 U.S. Immigration and Customs Enforcement (ICE) conducted widespread raids throughout the greater Los Angeles area – 90 percent of those taken into custody had prior criminal convictions.

A five-day operation conducted by ICE – targeting at-large criminal aliens, illegal re-entrants, and immigration fugitives – concluded on Wednesday with the arrests of 188 foreign nationals with 90 percent having prior criminal convictions, according to a statement from ICE.

The prior criminal convictions of those arrested are:

David Marin, field office director for Enforcement and Removal Operations (ERO) in Los Angeles, said that operations like this are executed to keep communities in the U.S. safe by removing those who pose a threat.

“Operations like this are emblematic of the vital work ICE Enforcement and Removal Operations officers do every day seeking to locate, arrest, and ultimately deport at-large convicted criminals and other immigration fugitives who pose a threat to public safety,” Marin said. “By taking these individuals off the streets and removing them from the country, we’re making our communities safer for everyone.”

Those arrested – 177 men and 11 women – are from a combined 11 countries, with the majority from south of the U.S.-Mexico Border:

ICE indicated that at least eight of the individuals arrested are now facing federal prosecution for illegally re-entering the U.S. after prior deportation – a felony punishable by up to 20 years in prison.

Those who are not undergoing criminal prosecution will be processed for deportation, while others who have outstanding orders of removal or illegally returned to the U.S. will be subject to immediate returns home.

California is one of only four states to be considered a “sanctuary state”, according to the Center for Immigration Studies which bases its assessments off of reports from ICE.

The arrests took place in the following counties: