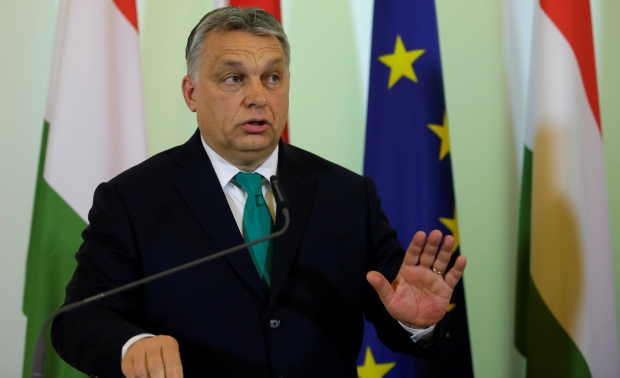 Welcome to The National Today newsletter, which takes a closer look at what’s happening around some of the day’s most notable stories. Sign up here and it will be delivered directly to your inbox Monday to Friday.

Hungary’s Viktor Orbán has made his political career out of painting apocalyptic scenarios for voters.

But now it seems he’s getting a scare of his own.

The populist, anti-immigrant prime minister suffered a surprise by-election loss this past weekend, with his Fidesz party getting thumped in a bellwether riding just weeks before the April 8 general election.

The loss to an independent candidate in the southern Hungarian community of Hódmezővásárhely may not sound significant, but Fidesz saw its share of the vote drop almost 20 per cent from the previous 2014 results. And it’s the hometown of János Lázár, the minister in charge of the prime minister’s office, a key Orbán ally.

Hungary’s Prime Minister Viktor Orban addresses a news conference in Vienna on Jan. 28. His party suffered a surprise loss in a recent by-election as it readies for the April 8 general election. (Heinz-Peter Bader/Reuters)

“We have to double our efforts, this is the moral of the story,” the Hungarian PM, who is seeking his third straight term, told reporters this week.

The reasons that might underpin the loss, however, are a bigger concern for the outspoken Orbán.

Over the last couple of weeks, his government has encountered some unexpected turbulence.

First, questions over whether they’ve actually been accepting more refugees than their xenophobic rhetoric suggests. (Orbán claims the numbers are up because Hungarian-American philanthropist George Soros has been paying people to cut holes in the razor-wire fences.) 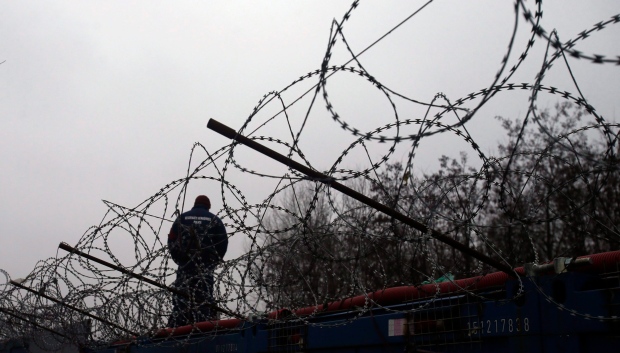 A Hungarian police officer stands guard at Serbia’s border with Hungary near a makeshift camp for migrants in Horgos, Serbia, in February 2017. Orban’s government is said to have been accepting more refugees than his party’s hard-line stance would suggest. (Darko Vojinovic/Associated Press)

And now allegations of corruption against the prime minister’s son-in-law.

Earlier this month, Hungarian authorities launched a fraud probe into European Union-funded public lighting projects that were awarded to a company that was owned by Istvan Tiborcz, the husband of Orbán’s daughter Rahel.

A two-year investigation by the European Anti-Fraud Office discovered “irregularities” and conflicts of interest in 35 projects between 2011 and 2015, worth some $63 million. The company, Elios Innovativ Zrt, was the only bidder for 16 of them. Hungarian prosecutors are now looking into what they termed “excessive budgetary fraud.”

The company denies the allegations and says the investigations are politically motivated. But at least one senior EU politician is calling for an international police investigation. 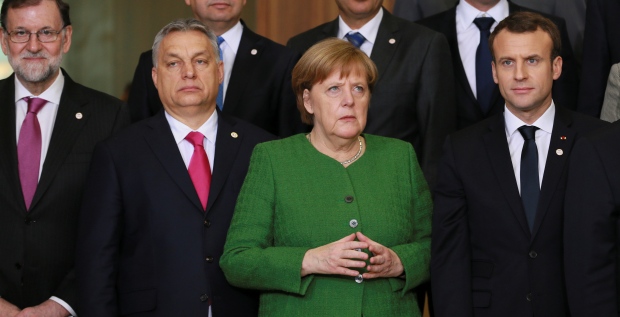 Orbán has never been fond of the European Union — despite the fact that it pays for 80 per cent of all infrastructure projects in Hungary through its cohesion fund. “We sent the muzzle back to Brussels and the leash back to the IMF,” the Hungarian PM declared in a state of the country speech earlier this month.

But recently, his anti-EU rhetoric has hit new heights. Last week, Orbán demanded that Brussels “reimburse” Hungary for at least half of the €1 billion it spent fortifying its borders to try and keep foreign migrants out.

And now, he’s demanding the resignation of the UN Commissioner for Human Rights, Zeid bin Ra’ad al-Hussein, for lumping him in with European “racists” who desire “ethnic, national or racial purity.”

Orbán has always made good use of his external “enemies.”

The question is whether the Hungarian people still have his back.

A return, and a change

Under a watchful police presence, through crowds of media and hovering parents, the students of Marjory Stoneman Douglas High in Parkland, Fla., returned to class this morning for the first time since a gunman massacred 17 teens and staff on Feb. 14. 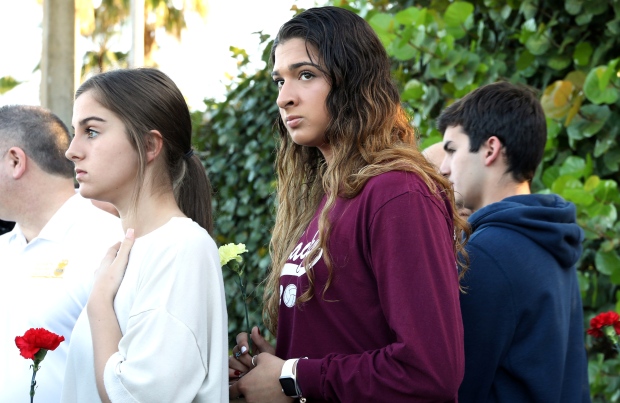 Students arrive at Marjory Stoneman Douglas High School on Wednesday for the first day of classes since the mass shooting in Parkland, Fla. (Mary Beth Koeth/Reuters)

There were hugs, and teddy bears. Someone from Connecticut brought therapy dogs for upset kids to pet. And the local police benevolent association handed out 1,000 carnations.

The mood was both somber and nervous.

Students and their parents were allowed back into the school this past weekend to collect their abandoned books and backpacks. The building had been scrubbed clean, and most of the damage repaired. Yet the legacy of the shooting was undeniable, starting with absent classmates and the presence of rifle-toting Sheriff’s deputies, including some armed with AR-15s, the same type of gun used by the 19-year-old killer.

Yesterday, several of the Florida survivors visited Capitol Hill in Washington as part of their ongoing push for meaningful gun control in the wake of the mass shooting — the ninth deadliest in America’s recent, bloody history. 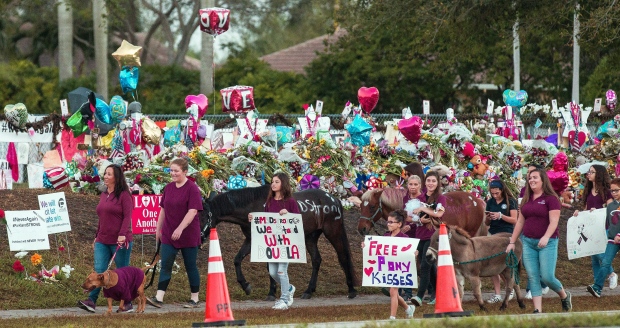 The Republican lawmakers who control Congress turned down a proposal by U.S. President Donald Trump to raise the minimum age for certain gun buyers to 21. And they indicated that they don’t intend to do much else.

“We shouldn’t be banning guns from law-abiding citizens,” Paul Ryan, the speaker of the House, told a news conference. “We should be focusing on making sure that citizens who should not get guns in the first place don’t get those guns.” 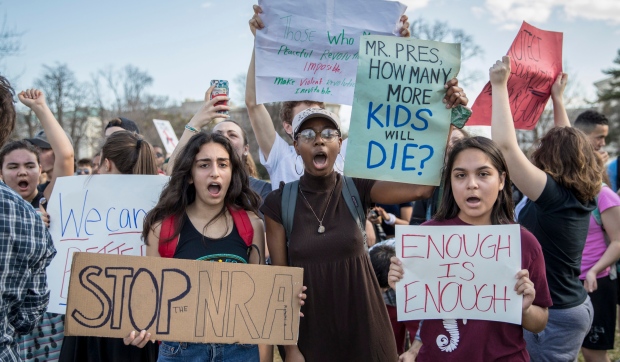 Students from Montgomery County, Md., rallied at the Capitol in Washington on Feb. 21 in solidarity with those affected by the shooting at Parkland High School in Florida. (J. Scott Applewhite/Associated Press)

Yet the seemingly intractable debate over gun control in the United States has undergone a major shift over the past week.

Companies including Hertz Rent-a-Car, MetLife and Delta Airlines have all bowed to public pressure and announced that they are ending discounts and other perks for the National Rifle Association and its members.

And Dick’s Sporting Goods, one of the biggest outdoor retailers in America, has announced that it will no longer sell assault weapons, or permit anyone under the age of 21 to purchase guns or ammunition.

But thoughts and prayers are not enough. We have to help solve the problem that’s in front of us. Gun violence is an epidemic that’s taking the lives of too many people, including the brightest hope for the future of America – our kids. https://t.co/J4OcB6XJnu pic.twitter.com/6VoKwJe8tH

In an interview on today’s Good Morning America show, Edward Stack, the CEO of the 675-store chain, said the company felt it could no longer sit on the sidelines while politicians dithered.

“As we looked at what happened down in Parkland, we were so disturbed and saddened,” he told the ABC program. “It moved us all unimaginably … we don’t want to be a part of this story.”

Stack disclosed that the Parkland shooter had purchased a shotgun from one of its stores last year, but that weapon was not used in the massacre. 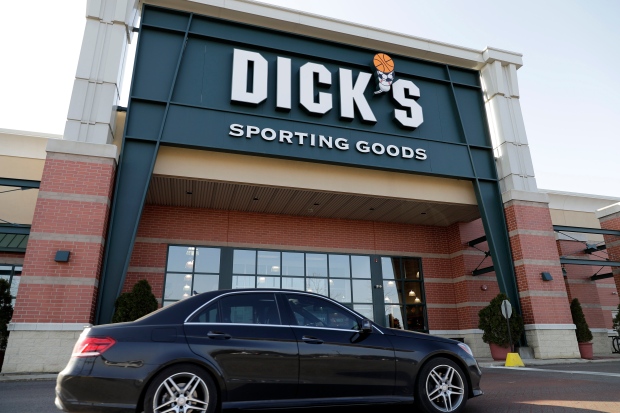 The Dick’s Sporting Goods chain announced Wednesday that it will immediately end sales of assault-style rifles and high capacity magazines at all of its stores, and ban the sale of all guns to anyone under 21. (Nam Y. Huh/Associated Press)

Dick’s will also stop selling bump stocks — devices that can convert a semi-automatic weapon into a full machine gun. The move comes five months after a 64-year-old Nevada man used a series guns fitted with bump stocks to kill 58 people, and wound hundreds more, at a Las Vegas music festival.

The chain has instituted an assault weapon sales ban before, in the wake of the Sandy Hook Elementary attack in 2012. But it was only temporary.

This time, Stack vows the decision is final, no matter the backlash from gun lovers.

Upstairs, kissed by the sunbeams coming through the windows, are the books on love and the history of emotion. Those are hers.

Directly downstairs, largely tucked under the house and carved into a hillside, is a room crammed with piles upon neatish piles of books and documents. All labelled: lies, catastrophe, torture, secrets.

Those are his. This is Daniel Ellsberg’s treasure trove.

The man who leaked the famed Pentagon Papers in the ’70s wants to show us more. And so we go back behind the boiler, past the wooden frame bent from the last earthquake, to another room.

Deep in the chamber, past where the light doesn’t reach, are even more. At this point the ceiling is so low, the room is more of a crawlspace. There might be a final wall at the end of it, but you can’t see that any more for all the books.

“You could get lost in here for days,” I suggest.

He’s not looking at me. His head is in a slightly moldy bin of yellowing documents. 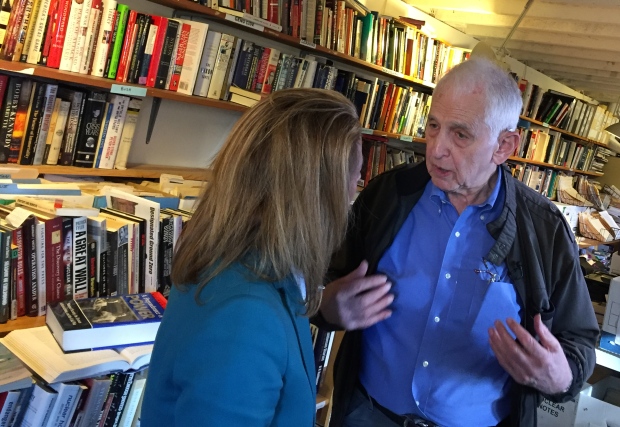 “These are important,” he says.

Frankly, they all are. And they are all history.

The thought that one more earthquake or one ugly flood could ruin it all is unnerving.

It certainly bothers his wife, Patricia Marx, who stays upstairs to do yoga while we rummage around in all that paper. She’s done her time down here. She even burned her fair share of  incense in these depths to try get rid of all the ugliness of the words on those pages.

But we’re here to talk about the pages he once lost: The nuclear secrets.

Back in 1971, a disgusted Ellsberg decided he could no longer stand that Americans were being lied to by their government about the Vietnam war. He made a decision to show them the truth. For months he photocopied reports from Rand Corporation about what the government actually knew of the war.

And he copied another set of papers: The nuclear ones. They were the estimates of how many would die.

“Estimates by the joint chiefs of how many they would kill if we initiated nuclear war: 600 million dead,” Ellsberg tells me.

At this, Ellsberg leans in, keeping eye contact with every word. All these years later he still communicates his message with urgency.

“Now, that’s not genocide. There’s no single ethnic group with 600 or 100 million people.

There’s a story about what happened to those documents. It involves an FBI chase and a Tropical Storm.

And there are endless tales of and about truth.

Is he worried about this era? Yes.

Does he think people would believe a major leak, acknowledge it as the truth, as they correctly did in the ’70s? On that he’s not so sure.

Which makes this man, whose whole life has been about facts, deeply unsettled.

Quote of the moment

“He’s a valued member of the team and he will continue to do the important work that he’s been doing since he started in the administration.” 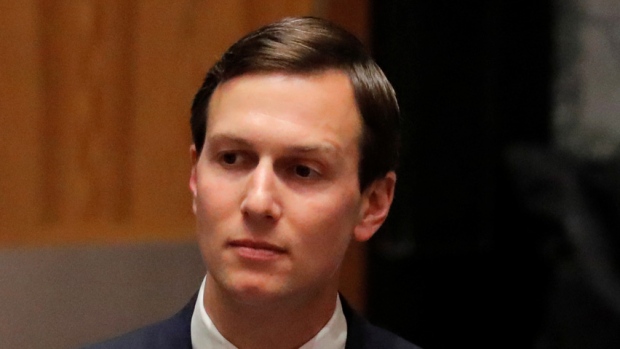 What The National is reading

What starts off as $250 worth of coca leaves in the foothills of South America doubles or triples in value every time it changes hands, ending up as $800,000 worth of cocaine ($1.45 million today.) The drug of choice for jet-setters has even made it to Canada. Toronto is awash in the stuff.

Cocaine, a recipe for profits7:27

Sign up here and have The National Today newsletter delivered directly to your inbox Monday to Friday.