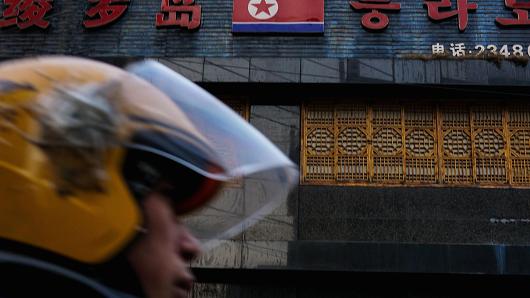 China, so far, has welcomed a planned meeting between Trump and Kim — due to take place before May — without indicating any interest in participating.

A Friday editorial in state-run newspaper Global Times “applauded” the summit, set to be the first between a sitting U.S. president and a North Korean ruler.

The milestone meeting suits Beijing’s interests so President Xi Jinping isn’t expected to interfere, analysts explained. Once a close ally of North Korea, the Asian giant has long supported de-escalation on the Korean peninsula and a moratorium on nuclear weapons.

“Beijing is getting what it wants without having to take a public role,” summed up DJ Peterson, president of geopolitics advisory firm Longview Global Advisors.

“China also has to be sensitive toward the needs of North Korea: Kim wants to be on his own with Trump so for now, China is likely to respect that and remain in the background.”

Moreover, a Trump-Kim summit could produce strategic gains for Beijing.

“One possible outcome might result with Beijing accelerating its call for a reduction in the presence of U.S. troops in Japan and South Korea, as well as pressuring Seoul to reconsider the need for the Terminal High Altitude Area Defense missile system,” said Chin-Hao Huang, assistant professor at Singapore-based Yale-NUS College.

“This gradual reduction of U.S. security and military presence in the region could be interpreted as a win for Beijing, but would only occur after U.S. consultation with Japan and South Korea.”